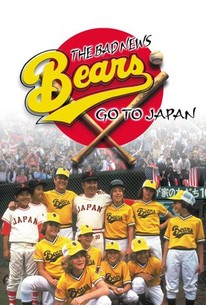 Filling the shoes occupied by Walter Matthau in the Bad News Bears and William Devane in The Bad News Bears in Breaking Training, Tony Curtis takes on the role of the teams newest coach in this, the third installment in the series. Jackie Earle Haley returns as Kelly Leak, the Bears' star player, as the team ventures to the other side of the world to face off against the best little league team in Japan. While there, the Bears find their way into mischief and Kelly finds love with a local girl. Though this was the last entry in the film series a television series followed a year later. ~ Matthew Tobey, Rovi

Lonny Chapman
as Louis the Gambler

Dick Button
as Himself

Jerry Ziesmer
as Eddie of Network
View All

Critic Reviews for The Bad News Bears Go To Japan

The Bad News Bears go to Japan is agreeable warm-weather entertainment, a better sequel than most.

The dangers inherent in sequel-making are clearly apparent in The Bad News Bears Go to Japan.

The film is a demonstration of the kind of desperation experienced by people trying to make something out of a voyage to nowhere.

Aside from Tony Curtis's star turn as a greedy hustler who takes charge of the titular Little Leaguers, there's little of note in this lifeless, pointless second sequel.

So much silliness has been substituted for the solid situations and characterizations of the original that it's hard to believe the same people had anything to do with both pictures.

So how much more can they get out of cussing kiddies playing baseball? Apparently an additional 91 minutes - 91 painful, horrendous, baseball-bat-to-the-crotch-three-times minutes.

And they can stay there.

Enough of the Bears already! Even Matthau bailed out.

Thankfully the Bears retired after their return from Japan.

Manages the amazing feat of seeming to both drag out its material and completely skim over it.

Audience Reviews for The Bad News Bears Go To Japan