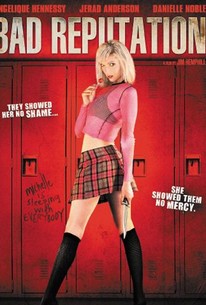 A shy student takes revenge on the classmates who raped and humiliated her in this independent revenge flick. Suburban outcast Michelle Rosen (Angelique Hennessy) doesn't have any friends, so when star athlete Aaron invites her to his big party, she gets dressed to the nines and prepares to impress. Upon arriving at the big bash, Michelle looks so good that the guys start ignoring their girlfriends to flirt with her. Before long the drinks are flowing, and Michelle is feeling tipsy. Later, Aaron takes Michelle up to his bedroom, and forces himself on her as she screams for him to stop. The following morning, Michelle returns to school to find her locker defaced, and gossip spreading. Now in addition to being labeled the class loser, Michelle is also the class slut. Strangely enough, she actually appears to embrace the title, too. Her necklines plunging as her skirts shrink, Michelle acts like nothing ever happened as she begins plotting her vengeance. Aaron and his friends will pay for what they did to Michelle, and the punishment for their crimes will be far greater than any of them could have ever imagined.

With a wonderful lead, taut writing, and a great play on vengeance and innocence lost, "Bad Reputation" is a horror film worth seeking out...

There are no featured audience reviews yet. Click the link below to see what others say about Bad Reputation!