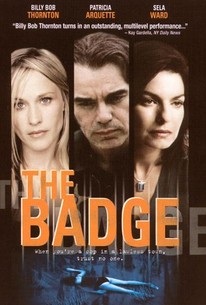 Billy Bob Thornton stars as Darl, a homophobic Louisiana sheriff assigned to investigate the murder of a local transsexual. Ever so gradually shedding his animosity toward the gay community, Darl finds himself shunned by his own friends and coworkers. But worse is still to come, as his investigation threatens to expose a far-reaching coverup by several high-ranking city and state politicians. Patricia Arquette costars as Scarlett, a stripper-prostitute who was once married to the murder victim. Originally slated for theatrical release under the title Behind the Badge, this film was reportedly shelved because of its marked resemblances to the like-vintage Billy Bob Thornton feature Monster's Ball. The Badge finally saw the light of day courtesy of the Starz! pay-cable TV service on September 7, 2002.

Critic Reviews for The Badge

That Thornton transcends the material time and again is ultimately just the type of thing that shines light on the need for the material to be transcended.

Predictable though enchanting..may be anomalous, it may unusual and it may be irresolute in parts, but it's definitely a well-performed and captivating piece of film

Audience Reviews for The Badge