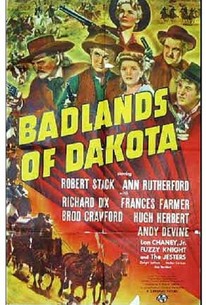 Up-and-coming Universal leading man Robert Stack made his western-movie debut in Badlands of Dakota. Set in the Dakotas during the days of the Great Gold Boom, the story finds brothers Jim and Bob Holliday (Stack and Broderick Crawford) dukeing it out over the affections of pretty Anne Grayson (Ann Rutherford). While all this is going on, Wild Bill Hickok (Richard Dix) does his best to neutralize the local criminal element-and to fend off the romantic overtures of boisterous Calamity Jane (Frances Farmer). The screenplay juggles the facts a bit, concluding with Calamity performing a self-sacrificing act straight out of Destry Rides Again to save her sweetheart from harm. Just to make sure that the audience doesn't mistake Badlands of Dakota for Real Life, Hugh Herbert is on hand with his patented "Woo woo!" comedy relief.

Dwight Latham
as The Jester

Walter Carlson
as The Jester

Guy Bonham & His Orchestra
as The Jester
View All

Critic Reviews for Badlands of Dakota

There are no critic reviews yet for Badlands of Dakota. Keep checking Rotten Tomatoes for updates!

There are no featured reviews for Badlands of Dakota at this time.