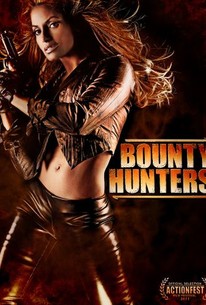 A gang of bounty hunters run afoul of a powerful mob boss after refusing to turn over an informant.

There are no critic reviews yet for Bail Enforcers. Keep checking Rotten Tomatoes for updates!

Carrying an extremely straight forward plot and a story that spans a single night of bounties, it comes as no surprise that this film's run-time is a mere 70+ minutes. For what it's worth, the story is fitting for a picture where all the major characters are bounty hunters and criminals.

Ultimately, it comes down to the action, which there is enough of. The choreography is decent. Decent to the point so as to not produce any memorable masterpieces, but more stylized brawls with some stratusfaction thrown in.

Trish stratus does what she does best and that is dishing out the punishment, as well as taking some herself. The schoolgirl outfit is also a plus. The acting on the other hand isn't so hot. Boomer Phillips is the comic relief guy, but he only shines during the outtakes. The rest of the cast suffer from mediocre dialogue and line delivery.

Despite Trish Stratus and her knack for violence, Bounty Hunters still comes up short. Too bad.