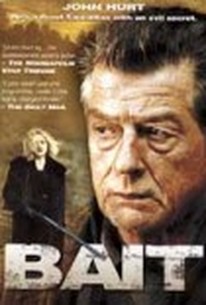 Reclusive Britisher Jack Blake (John Hurt) comes to the rescue when motorists Pam Raeburn (Sheila Hancock) and her daughter, Stephanie (Rachael Stirling), are stranded on a lonely road during a heavy rain. Offering the ladies shelter in his stately but rather gloomy mansion, Jack cannot help but notice that Stephanie bears a remarkable resemblance to his own daughter, who had been brutally murdered by an unknown assailant several years earlier. Then and there, Jack decides to use Stephanie as bait to trap the man whom he thinks is his daughter's killer. Made for television, Bait was originally presented on Britain's ITV1 on December 27, 2002. ~ Hal Erickson, Rovi

There are no critic reviews yet for Bait. Keep checking Rotten Tomatoes for updates!

There are no featured reviews for Bait at this time.