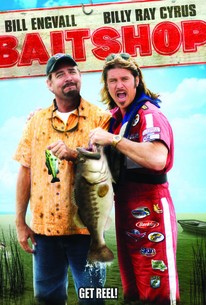 Bill Engvall and Billy Ray Cyrus star in this down-home comedy concerning a small-town bait-shop owner who enters into a local Bass Tournament in hopes of raising the money needed to keep his struggling store in business. Bill's Bait Shop is going under fast, and in order to remain afloat, frazzled owner Bill (Engvall) will have to raise $15,000 in record time. While Bill's family and friends are always willing to lend some moral support, they just don't have the cash needed to bail him out this time around. But Bill has always considered himself an expert fisherman, and soon begins plotting to take top prize in the upcoming annual Bass Tournament. But winning the tournament won't be easy, because Bill's nemesis, rival bait-shop owner Hot Rod Johnson (Cyrus) is entering the competition as well, and he's got a tackle box full of surprises for his longtime opponent. As the lines are cast and the tension grows, Bill remains determined to prove that he still the biggest fish that this small town has to offer.

Tim A. Powell
as Donnie Rains

Mikki Scanlon
as Woman on Street

Jeff Chase
as Man on Street

There are no critic reviews yet for Bait Shop. Keep checking Rotten Tomatoes for updates!

There are no featured audience reviews yet. Click the link below to see what others say about Bait Shop!