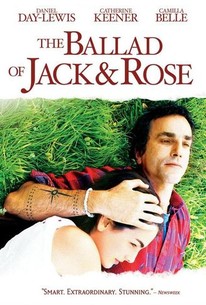 Critics Consensus: Heavy on the symbolism and overly contrived.

Critics Consensus: Heavy on the symbolism and overly contrived.

Critic Consensus: Heavy on the symbolism and overly contrived.

The Ballad of Jack and Rose Photos

A single father tries to come to terms with his 16-year-old daughter Rose's coming-of-age. When the father's new love, Kathleen and her two teenage boys come to live with them, Rose undergoes a sexual awakening with both liberating and devastating consequences.

Critic Reviews for The Ballad of Jack and Rose

So we have the Oscar-winning poet laureate's son wasting his and our time in a flower-power-hangover movie that might have been made 25 years ago, though better, by Hal Ashby.

Doesn't succeed in everything it sets out to do, but as a statement about the death rattle of 60s counterculture it's thoughtful and affecting.

Belle uses her blank, doll-like beauty to unnerving effect: she has the vulnerability--and the amorality--of an unbroken colt. Keener, who usually plays brittle, angry urban women, has never been so touching.

As indie efforts go, The Ballad of Jack and Rose pushes a lot of the classic indie audience buttons, coupled with some depressingly mainstream ones.

The entire movie seems to be suffering from the same suffocating disease as Jack.

We leave this movie hoping to see Miller and Lewis together again soon.

A sad tale of isolation and love.

The Ballad of Jack and Rose, like the community it elucidates, is not perfect. Like the people who try so desperately to make the most of the world in which they live, it is full of flaws, inconsistencies, and shortcomings.

A disjointed collection of characters whose dysfunctional behavior modes only reinforce the aimlessness of the narrative.

It is the harbinger of great films to come from an exceptional screenwriter and director.

Belle is equally good, proving that she's a real movie star in the making - there's a sort of feral energy to Rose that's genuinely scary and disturbingly unpredictable.

It's about two-thirds a great movie and worth it for those two-thirds.

Audience Reviews for The Ballad of Jack and Rose

A hermetic father and daughter, who are committed to green living on an island threatened by development, adjust to the father's decision to have his girlfriend and her family move in. What more can we say about Daniel Day-Lewis? He's an intense force who is always interesting, engaged, and committed, capable of menace and love with equal believability. The scenes in this film when he locks eyes with is daughter are some of the most charming and heart-breaking moments I've seen in a while. There's no doubt that he's the best reason to watch this film; although, there are also strong performances by Camilla Belle, Paul Dano (of course), and Catherine Keener. The story, however, is quite flawed. After Kathleen and her sons move in, there is a plot about either Rose's awakening sexuality or Rose using sexuality to resist her father's decision -- I'm not sure which. Either way, that decision doesn't make much sense considering what we know about Rose and Jack. Also, the Electra Complex moments were not only appropriately creepy, but they also seemed unmotivated, coming from nowhere and denying all that we knew and liked about the characters. Finally, I found the ending to be unnecessarily sappy. Overall, if you liked Daniel Day-Lewis's other work, then you'll likely find value in this performance as well.

This is the story of a bohemian environmentalist named Jack who lives alone on an island off the east coast of the U.S. on the remnants of an abandoned commune with his young teenaged daughter Rose. He suffers from a ad heart and is nearing close to death, and she knows nothing of life outside her isolated world on the island. No one else lives there, but they get an occasional visitor, though from a guy who brigns flowers for the girl's garden.Despite their isolation and his sickness, they have a good thing going. All of that changes however when he invites his secret mainland girlfriend and her two teenaged sons to comes to the island to live with them. Jack's intentions are good but maybe a little misguided since he doesn't have much time left and he wants Rose to have a mother figure and someone to give her guidance after he passes, but he's not prepared for the consequences of changing her world, which she doesn't want to change at all. This is basically a study in familial bonds, trying to create and maintain a utopia, and having to deal wih all that comes up when challenges arise. It's definitely an interesting premise, and it toys with some neat ideas and concepts, but I don't think it's quite as good as the similar film The Mosquito Coast. Still though, despite some issues, it's an okay enough movie to warrant a watch. The cast has a few notables, namely writer/director Rebecca Miller's husband Daniel Day-Lewis, Camilla Belle, the always great Catherine Keener, and appearances by Paul Dano, Jena Malone, Jason Lee, and Beau Bridges. Not a bad lot at all. They give some decent performances too. However, some of the writing is a little uneven, the characters aren't always as sympathetic as they should be, and thigns could be fleshed out a little more and better. But, it does have some really good cinematography, and the music is notable too, including two covers of "I Put a Spell on You" (one jazz, the other the CCR version (which opens the film)), and three songs by Bob Dylan among others. I liked what they were trying to do with this film, and i have to say that no, this isn't a film aout incest, although it is about trying to deal with those sort of issues. It's got material worht thinking about and discussing, even if how it is done is a little weak and could have been handled better. Overall, not bad, despite the problems. If you're in the mood for a quiet, introspective, and sometimes quite solemn indie drama, then give this one a go.

Cast: Daniel Day-Lewis, Camilla Belle, Catherine Keener, Paul Dano, Ryan McDonald, Jena Malone, Beau Bridges, Jason Lee, Susanna Thompson, Anna Mae Clinton Director: Rebecca Miller Summary: Jack is a father intent on raising his daughter (Camilla Belle) as an environmentally responsible adult. His complete devotion to the cause moves him to the remotest of islands, where he feels he'll be able to lead a more compassionate, "green" life. No matter how he tries, however, he can't seem to run from the demands of human interaction. My Thoughts: "First off I will say that this film had a great cast and great acting. But then there's the script. It's a bit of a mess with some things not making much sense. Like Rose's odd behavior. She is suppose to be acting this way considering she's been isolated with little human contact besides her father and his friend who delivers flower's to them. But when Jack moves in his girlfriend and her two sons, it is mentioned that he took Rose out of school when she was eleven. So she obviously hasn't been isolated for very long which disputes that as the reason for her odd behavior. Just things like this throughout the film that really make you question what you have already been lead to believe. Then there is the relationship between the father and daughter. Although I see how strange it is, but it's also kind of sweet how close they are and how much they do care for each other. It's one of those movies that leaves you with mixed feelings. But as I said before, it has a great cast and some really great acting, especially from Daniel Day-Lewis. Camilla Belle was good as well."

Obviously, the cast can't be beat, but it is a bit of a weird little flick. There are uncomfortable moments, but all in all it is a good movie that tells a real and complicated story.

The Ballad of Jack and Rose Quotes