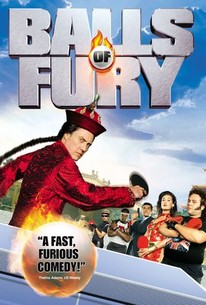 A disgraced former ping pong champion is drawn back into the world of high-stakes table tennis to carry out a top-secret mission in the feature directorial debut of Reno 911! writer/director Ben Garant. Far removed from the rigidly regulated world of professional sports, clandestine ping pong tournaments offer thrilling competition where only the strong survive. There was a time when the mere mention of the name Randy Daytona (Dan Fogler) was enough to make even those most hardened ping pong player cower in fear, but these days Randy has fallen out of favor with ping-pong fans. The former champ soon receives a much-needed shot at redemption, however, when he is recruited by a determined FBI agent named Rodriguez (George Lopez) to win a coveted spot in the upcoming underground table tennis tournament and ferret out the nefarious Feng (Christopher Walken), whose thriving criminal empire has transformed him into a true menace to society.

David Koechner
as Rick The Birdmaster

La Na Shi
as The Dragon

Brandon Molale
as Male Courtesan No. 1

Guy Stevenson
as Male Courtesan No. 2

News & Interviews for Balls of Fury

View All Balls of Fury News

Critic Reviews for Balls of Fury

A horrendously written and acted movie which even Walken can't save.

This comedy raises the odd laugh, largely from an absurd appearance by Christopher Walken as a sinister martial-arts kingpin villain.

Bad acting, writing and jokes... Apart from a few funny gags that save this from one-star ignominy.

It's good natured enough, but laughs are thin on the ground.

This movie is deadly.

This is an extremely silly movie, and I don't have no trouble with silly as long as it's funny, but that's where things go south.

Does low-brow comedy really get much better? Well, yeah, fortunately it does.

We are stuck with a below average film that Walken almost single-handedly carries to mediocrity -- a feat that is appreciated, but not enough to forgive Balls of Fury for its many faults.

A spoof on spy movies that generates few laughs but scores high for being bizarre.

On some subterranean level, it's a study of how celebrity agents can coerce a talented veteran actor into participating in one of the most painfully unfunny comedies ever made.

[Is it] good? Heavens, no. But it has its seedy charms.

Audience Reviews for Balls of Fury

One of those movies that makes you wonder why the hell anyone would make something like this. It wasn't funny at all, and I wasted an hour and a half of my life.

Balls of Fury may not be the best comedy, but it is lots of fun despite the fact that the plot is stupid. If you're in the mood for a mindless comedy, Balls of Fury may be that comedy to watch. The jokes are funny and despite the fact that it lacks a little something to really make it a great comedy film, Balls of Fury is simply a fun film. Sure this won't win any prizes, but for what it is; it's a fun time waster that has some good laughs. Dan Fogler is pretty funny, but Christopher Walken steals the show. Overall Balls of Fury is a good comedy that is better than what people have said about the film. The best way to describe the film is that it's good natured, mindless fun. And if you're looking for a good time waster, Balls of Fury will be that film. Not perfect, but it has enough laughs to keep you entertained. I enjoyed this film for what it was, and if you can look past the fact that it's very silly, you're to enjoy it too. As far as comedy films are concerned, Balls of Fury may not be the best, but it definitely isn't the worst. Enjoyable even if it's flawed in its conception. Balls of Fury is an average comedy with good laughs, just don't expect anything great, expect something fun and entertaining and that's what you get with this film. A fun film that is fun to watch with friends.