Balls Out: Gary the Tennis Coach2015 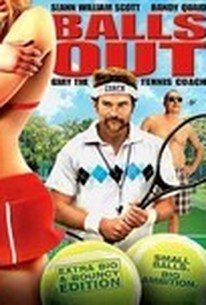 An overenthusiastic high-school maintenance man attempts to lead an unlikely group of misfits to the Nebraska state tennis championship in Dude, Where's My Car? director Danny Leiner's underdog sports comedy. American Pie star Seann William Scott stars as the ambitious janitor who believes he has what it takes to coach the winning team. ~ Jason Buchanan, Rovi

Critic Reviews for Balls Out: Gary the Tennis Coach

...there eventually does reach a point at which Scott's performance, ingratiating as it is, simply proves unable to compensate for the film's myriad of deficiencies.

A tad too obvious for my liking but then it's a Sean William Scott movie -- so obviously it's obvious. But as a tennis redemption movie (not too many of them around) it stands out for a sense of gruff fun.

Audience Reviews for Balls Out: Gary the Tennis Coach

Bottom of the barrel idiocy is vulgar, coarse and a total waste of your time. If this is the best work that Seann William Scott can find it won't be long before reality TV for him.

Watched this for Scott really, he's quite a funny guy in the right film but this ain't the right film. There's no real plot here, apart from the obvious sports plot of coach losers to victory against the odds. Nothing really happens in the entire film!! nothing funny, nothing exciting, just some lame toilet humour and Scott's ass in full view. Total waste of time which isn't helped by the fact its based on tennis.

It was sometimes funny and I kinda like it because I like tennis and I play it but don't count on liking that much it's kinda sucky. This centers on an overzealous high school janitor who takes on the task of coaching a group of lovable misfits to the Nebraska state championship, overcoming their motley backgrounds in the process