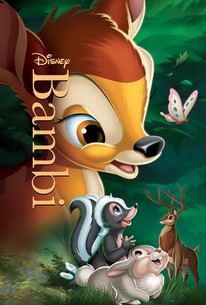 "Bambi," Walt Disney's beloved coming-of-age story, will thrill audiences with its breathtaking animation and characters who will touch your heart: Bambi, the wide-eyed fawn, his playful pal Thumper, the lovable skunk Flower and wise Friend Owl.

The bogus art which has been creeping into the Disney pictures is really hammered at you in this one.

One of the most timeless and universal coming-of-age films ever, Bambi ranks with the very greatest of Disney's classic masterpieces.

This animated feature based on Felix Salten's book about the coming of age of a fawn and his various forest friends (including the beloved Thumper) does convey some of the primal emotional power of Disney's features during this period.

For the first time, Disney has done his backgrounds in oils instead of watercolors. The result is striking.

The glow and texture of the Disney brush reach new heights, especially in the treatment of a summer thunderstorm and a raging snowstorm.

Even though Bambi is sanitized for a younger audience, the film itself is still one of the best animated movies of all time.

Is it absolutely monstrous not to consider the beloved Bambi one of the very best of Disney's 50-plus animated features?

Bambi (1942) is one of the most appealing, gracefully-told, lushly-beautiful, and popular Disney animated film classics. It was based on Austrian writer Felix Salten's 1923 storybook Bambi, A Life in the Woods.

Bambi is an artistic creation of indescribable beauty. [Full Review in Spanish]

It's a beautiful art piece with great music and enough of a plot and characters to be tolerable, even enjoyable.

A gorgeously animated film that may not please everyone due to its greater focus on characters and lack of a well-defined plot, but it is well-deservedly recognized as a classic now with its contemplative portrayal of love, nature and the cruelty of men against the forest and its animals.

A very touching and emotionally fulfilling coming-of-age story. The animation is beautiful and the music sequences are simply classic. Their are some dark moments as well, especially Bambi's mother getting killed, but I think kids can handle dark moments as long as the film has a happy ending. The voice talents are great, their isn't moment were a voice felt out-of-place. A perfect display of what Classic Disney was all about, making animated movies that are visually beautiful and telling endearing stories.

Bambi is definitely an animated classic that is at times pretty disturbing. Well, that scene when the hunters killed Bambi's mom was, at least. This is a must see for fans of Disney, and I remember loving this as a kid, but with time, the power of the film has slightly waned on me, and it's not the same film as I remember it being. For what it is, this is a very good film, and is a must see family film. The film is definitely one of Disney's most memorable films simply for the fact that Bambi's mom died, and it was deemed the saddest moment in film history or something like that. The film is sad, depressing at times, but it really is fun, entertaining and funny too. There are plenty of memorable characters that make this film special. Yes, it's traumatic, but there are more good moments in this film than bad. This film legacy, whatever your thoughts on this film may be, is secured. This is a solid piece of animation and is one of the finest films that Disney has made. The story is great, the voice talents are good as well, and the finished product is a memorable and classic animated film that has stood the test of time. This is a beautifully drawn film that despite the fact that it's depressing at times, like I stated before, there's lots of more than bad, and Bambi remains an animated classic. A must see film. A truly wonderful, and unique cinematic experience.