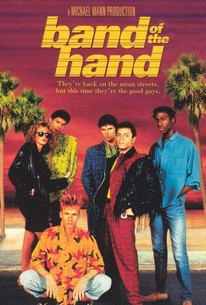 Band of the Hand Photos

Former Starsky and Hutch star Paul Michael Glaser warmed the director's chair for Band of the Hand. The film zeroes in on five juvenile delinquents who are plucked from their various detention facilities and unceremoniously dumped in the wilds of the Everglades. The boys begin to panic until hardcase Vietnam veteran Stephen Lang arrives. Lang explains that they've been paroled in his custody, and that it is his task to teach them how to work as a team in order to survive. The logic of this plan is to whip the boys into an elite vigilante unit, then sic them on the various drug dealers of America. The film features early performances by Lauren Holly and Larry Fishburne and Bob Dylan can be heard singing the title song.

Joe Petrullo
as Narc #2
View All

Critic Reviews for Band of the Hand

It plays like a TV pilot filled out with a few cusswords and strokes of excess violence.

Dumb movies are with us always, but it isn't every week that we have a Band of the Hand. Flawlessly false, it breaks into the elite of the super-stupid.

If you somehow remember this one with some fondness, do yourself a favor and never see it again.

It's the closest any film of the era comes to predicting the mission-based Miami world of the recent video game Grand Theft Auto: Vice City.

Audience Reviews for Band of the Hand

The film that made me forever think of James Remar as a bad guy. Miami Vice era cheese.

Band of the Hand Quotes