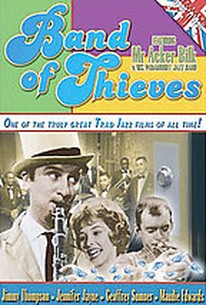 Jazz musician Acker Bilk plays himself in this cinematic jam session of music, melodrama, and low comedy. The film's title is literal: the plot involves a jazz band comprised of ex-convicts. Once released, they supposedly go straight, taking their show on the road. Actually, their tour is a subterfuge to commit a series of robberies. Jimmy Thompson appears in Band of Thieves for comedy relief, while Jennifer Jayne hangs around for sex appeal. ~ Hal Erickson, Rovi

Acker Bilk
as Himself

Maudie Edwards
as Duchess of Hartlepoole

Marianne Stone
as Cleaner
View All

Critic Reviews for Band of Thieves

There are no critic reviews yet for Band of Thieves. Keep checking Rotten Tomatoes for updates!

There are no featured reviews for Band of Thieves at this time.