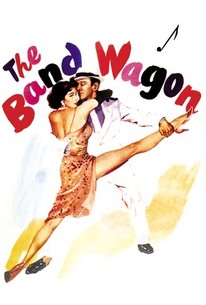 A lavish, enduring backstage musical from Vincente Minnelli, The Band Wagon tells the tale of Tony Hunter (Fred Astaire who was 54 at the time) a multi-talented but aging movie star who heads for the Great White Way in hopes of bolstering his flagging career. His two talented pals in New York are only too happy to help out by writing him a dazzling play. Unfortunately, for a lot of reasons, including the fact that there is great tension between Tony and his leggy co-star Gabrielle Gerard (Cyd Charisse) because she thinks him too old and he thinks her too tall, the production bombs. Fortunately this only inspires the cast and crew to work even harder until they eventually succeed beyond their wildest dreams. Some of the most memorable songs include: "Dancing in the Dark," "Triplets," and "That's Entertainment."

Ava Gardner
as The Movie Star

Herb Vigran
as Man on Train

Emory Parnell
as Man on Train

Paul Bradley
as Dancer in Park/Waiter

Bess Flowers
as Lady on Train

Elynne Ray
as Dancer in Troupe

Peggy Murray
as Dancer in Troupe

Judy Landon
as Dancer in Troupe

Bert May
as Dancer in Troupe
View All

News & Interviews for The Band Wagon

View All The Band Wagon News

Critic Reviews for The Band Wagon

Sorry, the beloved "Singin' in the Rain" isn't the finest of the legendary MGM musicals. "The Band Wagon'' has better music, better dances, better direction, more lavish sets and costumes and a wittier script (by the same writers).

A love song for the narcissistic, and theater people are sure to eat up the film, commentary, extras, and first rate DVD packaging.

The musical becomes a frenetic meditation on pop art versus high art, coming down hard on the side of the former.

Manic Minnelli, which isn't always for me.

While not as perceptive -- or hilarious -- as 1952's Singin' in the Rain in its skewering of backstage shenanigans among artists, it offers plenty of choice observations.

A fun musical with creative choreography, but far too little substance.

Minnelli's best musical is sparked by witty allusions to real-life showbiz persona like pretentious actor Jose Ferrer and birlliant but aging dancer Fred Astaire, the film's star, who shines when dancing, both with Cyd Charisse and alone.

On the whole it's one of the best musicals ever made.

...it's hard to dislike something so cheerful and uplifting as this movie.

It has its moments and the stars are good, but it's really overrated.

Audience Reviews for The Band Wagon

Beautiful little musical from Vincente Minnelli. The tale of the development of a Broadway musical provides some great moments in the interactions between potential cast members. Astaire gets to act as well as dance and he proves up to the task.

America has always suffered from an inferiority complex when it comes to "art", but in my mind the creative output of the country mid twentieth century ranks with anything Europe achieved in it's long history. Not many realised it at the time but in creating this unapologetic defense of American entertainment, Minnelli just may have. The irony is that across the Atlantic European critics were raving about film-makers like Minnelli, a technicolor respite from the stark tone of fifties European cinema. His use of color was particularly influential in Italy, a country whose neo-realistic cinema at the time was resolutely monochrome. Directors like Bava and Argento would adapt Minnelli's primary colors and elegant camera movement to fit the horror and thriller genres. The movie's finale was homaged by those other masters of musical comedy "The Muppets" in their comeback film of 2012. Even this year's Oscar winner "The Artist" owes much to this in it's tale of a fading star forced to auction his memorabilia. We begin with this auction where even the famous top hat and cane associated with Astaire fails to sell. Giving up on Hollywood he takes a train to New York and is humiliated by disinterested passengers and paparazzi. It's here we get the wonderfully melancholy song "By Myself", one of the quieter numbers but possibly the most memorable. Upon hitting 42nd Street he finds much has changed and we get the first rollicking dance number "A Shine On Your Shoes", a delirious mix of color, rhythm, song and Astaire's nimbleness, outrageous given he was 54 years old at the time. Astaire's co-star in the scene is Leroy Daniels, a real life shoe shine man who Minnelli found in Penn Station while researching the scene. It might not be as respected as the movie's famous closing number but as an example of choreography between man and camera this is unsurpassed. Of course Minnelli was a master of choreography but not just in the musical sense. A scene set at a party involving conversations in three separate (and color coded) rooms is dazzling, characters opening doors just at the right time to hear a snippet of conversation. Broadway has changed too, with Buchanan's director insisting on twisting every show concept into something "meaningful". Astaire is skeptical but goes along for the ride, encouraged by the long legs of his young co-star Charisse, a rising ballet dancer. It's in the relationship between Astaire and Charisse that Minnelli demonstrates his point, that high art and entertainment can coexist. The movie's final number "The Girl Hunt Ballet" is one of the greatest ever expressions of this ideal. The American genre of the day was Film Noir and Minnelli gives us the most colorful Noir homage ever seen. He may resemble your elderly uncle but in this sequence Astaire achieves a level of cool that Dean and Brando could only dream of. It's a sequence famously homaged by Michael Jackson in his "Smooth Criminal" video. For fans of classic Hollywood the real punch the air number is "That's Entertainment" and as it's lyrics suggest, this is the art that appeals to the heart.

One of the best, BEST, scenes in all musicals, and the always lovely Cyd Charisse.

Gene Kelly is a million times better than Fred Astaire. Sometimes it was really funny but the story in general kind of flopped. I really really liked the Triplets dance number though. Maaaagic!