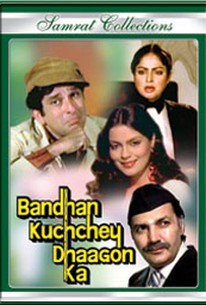 Prem Kapoor is a businessman who lives in a small town with his wife, Bhavna, who is a Judge, and two children, Sunil and Babli. One Sunday, he gets a visitor by the name of Prakash Dutt, who has brought a letter from a woman named Sneh who lives in Bombay, has known Prem for the last seven years, and wants to urgently meet with him. Prem departs for Bombay, meets with Sneh and finds out that he is the father of a seven year old boy, Bittu, who is Sneh's son, as a result of intimacy shared between them over seven years ago. Sneh has been diagnosed with cancer and is not expected to live long, she wants Bittu to be taken care of, and Prem agrees to do so. He takes Bittu home with him, while Sneh goes to America for treatment. It is here that Prem will be confronted by Bhavna on one hand, his children on the other, and a blackmailer who wants a huge sum of money to keep the truth about Sneh and Prem's affair from Bhavna and the children.

There are no critic reviews yet for Bandhan Kuchchey Dhaagon Ka. Keep checking Rotten Tomatoes for updates!

There are no featured reviews for Bandhan Kuchchey Dhaagon Ka at this time.