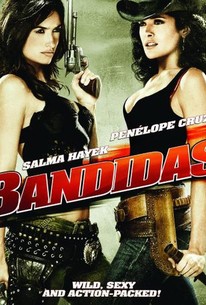 Latina heartthrobs Salma Hayek and Penélope Cruz co-headline the rousing indie Western Bandidas. The brainchild of producer/screenwriter Luc Besson (La Femme Nikita, The Big Blue), Bandidas marks one of only a handful of films in its genre (along with Bad Girls, Cattle Annie and Little Britches, and Johnny Guitar) to use women as its principals, and distinguishes itself further by adding hefty doses of comic relief to the Western formula. Hayek and Cruz play Sara and Maria, respectively -- two women whose fathers (one a banker, the other a peasant farmer) are each wiped out by a nasty, vile, gun-wielding swindler named Tyler Jackson (Sling Blade co-star and country music singer Dwight Yoakam). Jackson cuts a bloody swath across the Southwest as he reduces one bank after another to an impoverished trash heap. In revenge, these women (who sit at opposite ends of the personality spectrum) vow to beat Tyler at his own game by hitting and robbing each of the banks before their father's killer can reach them. Steve Zahn co-stars as the "criminal science" officer who aids the girls in their mission; Espen Sandberg and Joachim Roenning co-direct.

Despite its sticky ethics and crude slapstick, I thought Bandidas was fun.

A nominal action-comedy that fails to provide either excitement or amusement.

Never has a film with Luc Besson's fingerprints on it popped so little, but only directors Joachim Roenning and Espen Sandberg are to blame for the film's lack of imagination.

After a while the derivative, predictable plot turns and umpteenth cliched joke ensure that Bandidas never quite thrills as much as it could have.

A shameful cinematic exemplar, which discredits the cinema itself. [Full Review in Spanish]

Bandidas comes from writer/producer Luc Besson, and it has the same kind of brisk, lightweight comic action as films like Wasabi (2001) and The Transporter (2002).

This is essentially a buddy comedy with cleavage, and quite a bit at that.

a pleasant surprise, especially for what is basically a DVD release... and it helps to have two gorgeous women headlining the film

It's incredibly inconsequential, buttery entertainment, but it'll surely put a smile on your face if you can find a way to appreciate its rambunctious spirit.

Joseph Proimakis
Movies for the Masses
View All Critic Reviews (16)

Light comic fun as two women from different sides of the track team up in Old Mexico to rob banks. Dwight Yoakum is fun as the moustache twirling bad guy, Steve Zahn the ever underappreciated good guy, but the highly watchable leads, Penelope Cruz and Salma Hayek are the buddy team and heart of this Besson produced light entertainment buggy ride.

Bandidas is unrepentant fun. Salma Hayek and Penelope Cruz begin as opposites in a familiar western theme of revenge against the greedy out to murder, steal, and swindle their land. Initially distrustful of each other, fate soon unites the two feminine heroines against the unscrupulous Tyler Jackson (Dwight Yoakam), ultimately prevailing in this swashbuckling action comedy. This film is multiculturalism at its funniest; it's a joint French/Mexican/American production starring the Spanish Cruz, the Mexican Hayek, filmed by two Norwegian directors, shot in Mexico. The movie is over the top all the way. It features bank robbery basic training, pratfalls galore, banjos, ice skates, and even "Matrix-y" type slow-mo action. This is the funniest western since Shanghai Noon, but it didn't have catfights. Veteran comedic comrade Steve Zahn is hilarious as the crime scene expert who joins forces with the bad girl robin hoods. Watching his "seduction "scene with Cruz and Hayek, I concluded that he must be the luckiest man in the history of motion pictures! These leading ladies complement each other like more traditional action duos. You root for them, knowing they'll triumph in the end. They're a dynamic pair alright, and I'm not just talking about their epic chests! In the end, they ride off into the sunset, their legend only to increase.

A somewhat disappointing western adventure, pretty much written for real life friends Cruz and Hayek, who are at least really nice on the eyes. The script, on the other hand, doesn't have much to offer you didn't see a lot funnier in "Maverick", for example. Especially the beginning, when the farm chick and spoiled brat have nothing to do but bitch fight to Mariachi music, is pretty weak. There are a few amusing scenes throughout the second half, especially the bed sequence with Steve Zahn, but then again a lot of logic flaws and pointless stuff. The slow motion part of the showdown is kinda cool but doesn't want to fit into this kind of film at all. Movie fans may at least spot a few references to Sergio Leone, if they consider those stealing or an homage is up to them. But overall, no one who skips this film is missing much.

Despite the fact that Bandidas is written and produced by Luc Besson, there really is nothing spectacular about this. Well, maybe the fact that BOTH Salma Hayek and Penelope Cruz are the co-stars.

What we have here is a comedic Western. The thing is that it isn't all that funny, but it can be a good time. The story is straightforward and easy to follow, but it isn't all that interesting and it does feel a little choppy at times. The first 10 minutes are pretty lame. It leads one to believe that the whole 90 minutes will be a waste of time. Funny thing is, 15 minutes in, the film takes a sharp turn and becomes better than expected, albeit it isn't award winning.

The pacing is pretty quick, even though there isn't a whole lot of shooting going on. It is a pity, since there is the potential for shootouts in this story. I will admit that the slow motion train scene is fantastic.

Salma Hayek and Penelope Cruz have nice chemistry together. Hayek is OK and Cruz is great in the acting department. This movie is rated PG-13, but this film does have a bunch of sexuality from the 2 leading ladies. Steve Zahn is one lucky guy. Dwight Yoakam is a pretty decent villain and Sam Shepard is a nice addition to the cast.

Bandidas isn't a memorable film in anyway, except for the fact that Hayek and Cruz are together in it, but it isn't a waste of a watch.