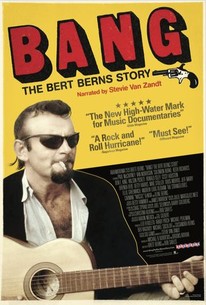 You may have never heard of Bert Berns, but you know the enduring songs he's written and produced: Twist & Shout, Cry to Me, Tell Him, Piece of My Heart, Cry Baby, Hang On Sloopy, I Want Candy, Everybody Needs Somebody to Love - Berns' career IS Rock and Roll. Berns sessions made legends of Solomon Burke, The Isley Brothers, The Drifters, Ben E. King, Wilson Pickett, Van Morrison, and Neil Diamond, and his songs became chart-topping covers for the likes of the Beatles, the Rolling Stones, the Animals and Janis Joplin. His premature death at 38 cut short a seven-year streak of hits, rooted in his early Brill Building and 1650 Broadway days, through his tenure at Atlantic Records to the formation and success of his own labels Bang Records and Shout Records.

The story itself is arresting, and if that's all "Bang" offered, that would be enough. But "Bang" does more.

Bang! is brimming with anecdotes from the people who knew Berns best. Bert Berns may not be a household name, but once you see this documentary you won't listen to his songs without thinking of the man behind those chart-toppers.

[The] impressive lineup of interview subjects properly tells the story of a man whose contributions to popular music have been largely unheralded.

The documentary may not have widespread appeal, but should engross viewers who know the songs but not the man behind them.

If you love the music Berns made, you'll love this movie; if you don't, I feel for you, but "Bang!" might nevertheless entertain with its dish.

As documentaries go, Bang! is fairly by the numbers but comes to life when the artists that performed for Berns share their stories on this eccentric and unique figure.

The filmmakers do a highly entertaining and engaging job of introducing the world to a musical pioneer whose work it already knows by heart.

Bang! The Bert Berns Story isn't one of the more essential boomer-nostalgia docs, but it hits the target more often than not.

It has a ton of heart and a bevy of interesting interviewees who paint a clear and coherent picture of who Bert Berns was inside and outside of the music biz... It's a must see for any fan, new or old.

Entertaining documentary about a very talented and unheralded 1960s songwriter.

Affectionate but still eye-opening look at songwriter and producer Bert Berns and his impact on 1960s rock music.

There are no featured audience reviews yet. Click the link below to see what others say about BANG! The Bert Berns Story!