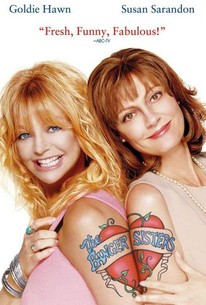 Critics Consensus: Hawn and Sarandon are terrific together, but the hoary plot is predictable and contrived.

Critics Consensus: Hawn and Sarandon are terrific together, but the hoary plot is predictable and contrived.

Critic Consensus: Hawn and Sarandon are terrific together, but the hoary plot is predictable and contrived.

For some folks, the 1960s never really ended, and one woman still cheerfully stuck in the Summer of Love discovers her one-time best friend has left that decade as far behind as humanly possible in this comedy. In the late '60s and early '70s, Suzette (Goldie Hawn) and Vinnie (Susan Sarandon) were two of Southern California's most celebrated groupies. Affectionately nicknamed "The Banger Sisters" by Frank Zappa, best friends Suzette and Vinnie partied hearty with practically every rock star of the era who mattered, and kept a collection of Polaroid snapshots documenting their randy exploits. In 2001, Suzette is still her free-spirited self, and after losing her job as a barmaid at an L.A. rock club, she decides to look up Vinnie, whom she hasn't seen for 20 years. Suzette hits the road for Phoenix, AZ, to pay Vinnie a surprise visit, and en route picks up Harry (Geoffrey Rush), a novelist with writer's block who can't drive and hasn't had sex for a decade. Upon her arrival, Suzette discovers Vinnie isn't quite the same person who used to chase any man with long hair and an electric guitar. Now going by her given name of Lavinia, she's a straight laced social worker with a lawyer for a husband, Raymond (Robin Thomas), and two teenage daughters, Hannah (Erika Christensen) and Ginger (Eva Amurri), none of whom know a thing about her wild and crazy past, and have a pretty hard time imagining Lavinia even attending a rock concert. Eva Amurri comes by her role as Susan Sarandon's daughter naturally enough -- Amurri is Sarandon's daughter in real life. ~ Mark Deming, Rovi

Andre Ware
as Jake the Bartender

Larry Krask
as Man in Bar

News & Interviews for The Banger Sisters

View All The Banger Sisters News

Critic Reviews for The Banger Sisters

No Oscar performances in this bunch -- just a string of funny moments in a film that accepts our flaws.

This is the directorial debut of Bob Dolman, who got his start scripting WKRP in Cincinnati, and as one might expect, he handles the comic material with aplomb and falls on his face whenever the story turns serious.

Suzette and Vinnie's wild girl reunion... is as dispirited and distinctly unmagical as the rest of this lame effort.

Charming, laughable, entertaining and enjoyable. You will get a bang out of The Banger Sisters.

Watching movies like this, it's easy to understand actresses' common complaint about the quality of roles for women of a certain age.

The Banger Sisters is not a terrible film but ultimately a missed opportunity, an opportunity to show the outcomes of those deluded Band-Aids from Almost Famous, or even as a demonstration of the inevitable paths of people whose experiences peaked when th

Despite its rock 'n' roll trappings, The Banger Sisters is like an After-School Special with better actors and more swearing.

Audience Reviews for The Banger Sisters

Watched it once before and was disappointed. Couldn't remember why. Now I do. It's just not very good. Goldie is annoying and her lips are the worst. I also didn't like the ocd guy. Unconvincing characters and waste of a storyline.

love susan sarandon! i think we could all see each other as one of these characters i know i could! this is a fun movie!!

yea right i saw it cause i thought they were called banger sisters for a reason. guess not.

Two middle aged women teach us lessons in responsibility. Or lessons in having fun and being yourself. Or finding a perfect balance between the two. Whatever they're trying to teach us they do a pretty poor job. Why should I care about these women? From what I gather they used to be right proper slappers. Geoffrey Rush is involved in some sub-plot about a writer planning on killing his father. Weird. I guess this is the female equivalent to Wild Hogs, but then again perhaps these people should stay true to themselves in the first place, or not bitch and moan when they have a family. I don't really care. Still it's well acted and never bad or dull, just very pointless.