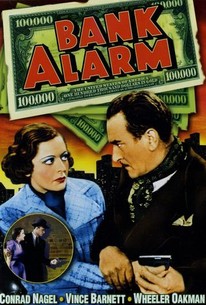 Bank Alarm was one of four low-budget but high-entertainment crime melodramas starring Conrad Nagel and Eleanor Hunt as Federal agents Alan O'Connor and Bobbie Reynolds. On this occasion, the two G-people are on the trail of a gang of desperate bank robbers. Making their job slightly easier is the fact that the crooks are leaving behind a trail of counterfeit money. Unfortunately, they're also leaving a trail of corpses, meaning that Alan and Bobbie had better get a move on before someone else gets bumped off. Bank Alarm was the last of the Nagel-Hunt crime series, all of which were produced by the financially canny George A. Hirliman.

Henry Roquemore
as Sheriff
View All

Though no great shakes of a crime drama, it still makes for passable entertainment.

There are no featured reviews for Bank Alarm at this time.