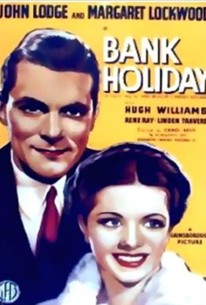 A minor effort from a major director, Bank Holiday is little more than a series of anecdotes involving middle-class Brightoners on holiday. Margaret Lockwood and Hugh Williams played the largest roles, as a couple who find love during their one-day respite from work. Comic relief (which in this film is superior to the straight plotting) is provided by several reliable character actors, notably Wilfred Lawson as an officious constable. The film's major purpose is to poke gentle fun at the foibles of the working class, and as such it doesn't amuse as much as it did back in 1938. Bank Holiday was released in the U.S. as Three on a Weekend.

Kathleen Harrison
as May

Angela Glynne
as Marina
View All

Although in essence it's a lightweight romantic melodrama with comic elements, it also provides a fascinating glimpse of the leisure activities of various British social classes.

This is good entertainment.

Reed's film, in its gentle mockery of the hopes and dreams of its 'ordinary' protagonists, is unique.

The excellent acting and brilliant direction, coupled with the fact that the plot deals with the realities of English life, give it a vividness that makes it definitely a film to see.

Director Reed is a long way from The Third Man, but his assured direction is already much in evidence.

There are no featured audience reviews yet. Click the link below to see what others say about Bank Holiday!