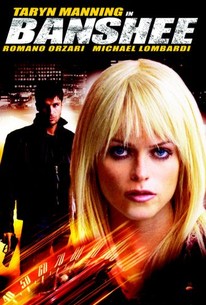 A female car thief becomes the target of a notorious serial killer after stealing his mint-condition '66 Dodge Charger in this made for cable thriller from director Kari Skogland (Zebra Lounge, The L Word). Sage Rion (Taryn Manning) is a car thief who's so proficient at her profession that she's earned the nickname Banshee in certain criminal circles. Her skill for stealing cars is unmatched, and when she stumbles across the Dodge Charger of her dreams the temptation proves too powerful to deny. Unfortunately this particular muscle car belongs to a genuine "Badass" (as indicated on the license plate), a fact that Sage discovers all too late after arriving home and finding her boyfriend's severed ear along with a threatening note. Should Sage fail to return the car to its rightful owner by midnight, her recently-hearing impaired boyfriend will meet a grisly demise. But Sage isn't up against your typical murderous madman, because this particular psycho (Christian Campbell) is a popular local DJ who records the screams of his victims, mixes them with the sound of his accelerated hearbeat, and uses the resulting sounds to keep local clubbers on their feet all through the night.

Tony Calabretta
as Mitch
View All

There are no critic reviews yet for Banshee. Keep checking Rotten Tomatoes for updates!

I've seen this movie twice now. It is OK. Taryn Manning plays Sage a tough chick who wants revenge when a crazy dj kills her boyfriend. Even has the obligatory car chases.

Not a bad thriller and Taryn Manning is an okay anti-heroine in this dangerous cat and mouse game.