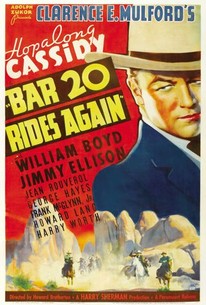 Bar 20 Rides Again was the 3rd of William Boyd's Hopalong Cassidy flicks. As with most early entries in the Cassidy series, the film is longer than usual, with emphasis on dialogue and situation for the first 2/3 of the picture. This time, Hoppy runs up against cattle rustlers, headed by Harry Worth, a land baron with a Napoleonic complex. Had the film been made a few years later, Worth would have been depicted a sagebrush Hitler. The slowness of early reels is compensated for with a thrilling "race to the rescue" climax. Boyd's sidekicks in Bar 20 Rides Again are George Hayes (not yet "Gabby", but "Windy") and Jimmy Ellison; leading lady Jean Rouverol later became a prolific writer of children's books.

Harry Worth
as George 'Nevada' Perdue

Chill Wills and the Avalon Boys

There are no critic reviews yet for Bar 20 Rides Again. Keep checking Rotten Tomatoes for updates!

There are no featured reviews for Bar 20 Rides Again at this time.