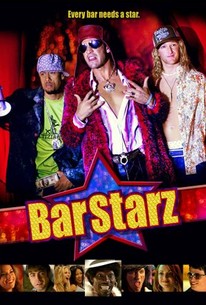 In the glamorous world where the ability to get past the velvet rope separates the losers from the winners, one newly single guy is about to get a shot at becoming the latest inductee into the coolest club around. Barry Shlotzak is a nice guy with a psychotic girlfriend. After emancipating himself from the relationship in order to get a fresh new start in life, Barry is convinced by his best friend, Douglas, to enter into a contest designed to select an intern for the local club crew known as the "Bar Starz" -- a trendsetting group that personifies cool, and whose members can effortlessly gain access to any nightclub at any time. Now, in order to prove that they have what it takes to become an official member of the Bar Starz crew, Barry and the other aspiring Bar Starz will endure a rigorous series of tests designed specifically by lead star Donnie Pintron to assess their nightclub aptitude. Of course, you have to dress like a superstar to be a part of this crew, but that's only the beginning. A true member of the Bar Starz can stroll effortlessly past the ropes of even the most exclusive nightclub, and pick up even the hottest of babes with the least amount of effort. Does Barry have what it takes to become the toast of the town, or was he simply better off being a plain old nice guy? ~ Jason Buchanan, Rovi

Charlie Murphy
as Clay the Doorman/Arnie

Affion Crockett
as TJ
View All

There are no critic reviews yet for Bar Starz. Keep checking Rotten Tomatoes for updates!

There are no featured audience reviews yet. Click the link below to see what others say about Bar Starz!