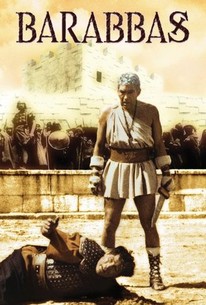 This epic from the Bible tells the story the of murderer and thief Barabbas (Anthony Quinn), who hung around Calvary Hill when Jesus took his place on the cross. He searches for spiritual faith as he hears more about the followers of Jesus in Jerusalem. His search for disciples uncovers no new knowledge of the movement. He has eyes for Rachel, and before she is stoned to death, she accurately predicts that Jesus will rise from the dead. Arrested once again, he is chained to Sahak (Vittorio Gassman) and the two become slaves in a Sicilian sulphur mine. The two are the only survivors when the mine collapses and are sold into gladiatorial slavery where Barabbas and Torvald (Jack Palance) fight to the death in a bloody battle at the Coliseum. Barabbas is converted by St. Peter (Harry Andrews) in this often violent and bloody adventure story.

Arnoldo Foà
as Joseph of Arimathea

Like Fleischer's oeuvre as a whole, it's ripe for reconsideration-the Greatest Story Ever Told has been Retold and Retold, but Barabbas brings it back from the dead.

Problems of dubbing and pacing and a lack of scene-to-scene variety weigh the movie down, but Christopher Fry's pointed and intelligent free adaptation of Pär Lagerkvist's 1950 novel resists grandiloquence.

One might be likelier to forgive this if the film's declared intentions were less high-minded.

Barabbas is a beautiful work of Fleischer and Quinn. One of the most exciting and terrific Biblical films. Fresh.