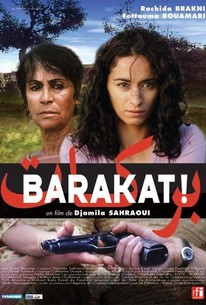 Algerian director Djamila Sahraoui's sobering drama Barakat! chronicles the plight of Amel, an emergency physician living and working in a small town hospital on the Algerian coast, during that nation's blood-soaked civil war in 1990. One evening, Amel returns home to discover that her husband has vanished without a trace. Inferring that he was abducted and taken underground by a group of militant Islamic terrorists, Amel confronts the authorities but is promptly snubbed and given the runaround. Refusing to be deterred, Amel vows to head for the war-torn surrounding foothills and locate the man herself. An older woman who lives nearby, Khadidja, once fought for Algerian independence against the French as a young girl; she insists on joining Amel. Though the women discover massive differences between themselves in outlook, politic, and breadth of experience, they quickly realize that they need to stick together and resolve minor disagreements if they are to confront the enemy successfully. The film thus becomes a testament to female camaraderie, resourcefulness and courage in the face of daunting odds. Zahir Bouzrar, Rachida Brakni and Fettouma Bouamari co-star. ~ Nathan Southern, Rovi

There are no critic reviews yet for Barakat!. Keep checking Rotten Tomatoes for updates!

There are no featured reviews for Barakat! at this time.