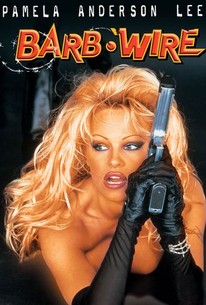 This quasi-feminist fantasy adventure is based on a popular Dark Horse comic and is set in a civil-war-torn United States. The year is 2017 and a Nazi-like Congressional Directorate has comandeered the government. The evil CD threatens to wipe out entire cities with Red Ribbon, a manufactured virus derived from HIV. They have already successfully tested it on the city of Topeka, and only Steel Harbor remains free. Therein lives Barb Wire (Pamela Lee), a wild-haired black leather and thigh-high boot-wearing, hog-riding spit-fire bounty-hunter who carries antibodies for Red Ribbon in her DNA. Barb frequently captures her fugitives by posing as a stripper. The only time she blows her cover is when someone dares to call her "babe." Her usual reply is punctuated by a violent act upon the offender. On her latest mission, Barb has captured a rebel fugitive, Krebs, who possesses special contact lenses that can defeat the retinal scanners the CD uses to prevent people from defecting to Canada. The evil regime wants those lenses before Krebs can pass them to Cora, D a former government physician who plans to use them to save thousands of lives.. Barb ends up with the lenses and must choose between selling them or giving them to Cora. Lee (best known for starring in the long-running syndicated show Baywatch) performed many of her own stunts.

Joey Sagal
as Fred the Bartender

Nicholas Worth
as Reuben

Ron Balicki
as Customs Agent No. 1

Tina Cote
as Woman in Bar No. 1

Vinnie Curto
as Aide to Pryzer

Miles Dougal
as Goon No. 1

David Andriole
as Goon No. 2

Joe Sagal
as Fred the Bartender

Rene Stahl
as Woman in Bar No. 2

The irony of this style, with its high-swank grunge clutter, is that it's too dissociated to have coherence even as pop; we're always aware that we're watching sets being photographed.

The movie carries its cyberpunk variation right through to the end, and usually with enough wit and craziness to freshen the mix. Then, there is Pamela, whose tight, disciplined performance deserves more respect than it will almost certainly get.

Its main source is a comic book, but it might as well be a computer.

The film's haphazardly edited, lacks narrative clout, and rambles on to a ludicrously extended conclusion.

Made with a wafer-thin stylishness that thinks dressing the Congressionals like storm troopers is creative, Barb Wire plods along, following one pro forma scene with the next.

Every time it tries to approach the subject matter with sincerity, it just grows more unintentionally goofy.

A lemon of a comic book movie with an uninteresting heroine, bad acting, and a bland humorless premise...

We used to complain about Hollywood travesties of great books; now we're reduced to kvetching about movies that cheapen the comic strips on which they're based.

There isn't a scene that Anderson-Lee walks through that didn't grab my attention.

The most inane and inept hootfest (or, for that matter, hooterfest) to hit the big screen since Showgirls.

Barb Wire is just an excuse for studio executives to fill their wallets by casting Pamela Anderson (who was still big back then) in a film that has little substance. Barb Wire is a terrible attempt at an action film and is definitely one of the worst action films that I've ever seen. The film has some of the worst acting possible. Based on a comic book, Barb Wire takes place in the future where the U.S government has fallen and a Fascist military dictatorship has taken over. Barb Wire's plot is pretty thin with poor development. Pamela Anderson is definitely no actress and this film proves it. The only thing that's going for this film is that the film looks great. The sets are awesome and the look of Steel Harbor is wonderful. Unfortunately, that doesn't redeem the film from being a terrible miscalculation. I despised this film, and thought it had nothing interesting to offer the viewer. Barb Wire is a mess, and doesn't work as an effective action film. This is one awful film that just doesn't cut it. The film is sloppy and it plays out like a bad B movie. There are no redeeming aspects of this film. Pamela Anderson is a has been sex goddess and with a role like Barb Wire, studio executives knew how to exploit that to their advantage. Unfortunately, Barb Wire is a piece of trash with nothing going for it. The plot is paper thin, and is virtually nonexistent. Barb Wire is a definite miss!

I didn't see the whole movie.....cause it was so fucking bad

"Barbara Kopetski died in the war. I'm Barb Wire." Back in '96, Pamela Anderson was the daydream of almost every young man. I'll have to admit, I was one of 'em if I remember correctly. Later on, I'm almost ashamed of that considering that she has not done anything brilliant ever in her career (if you're not counting her record appearances in Playboy magazine...) Well this film ain't brilliant either! In fact, it has got to be one of the most stupid films I've ever seen. It has some minor cult status within some groups but "Barb Wire" is nothing but an interesting failure. There was a lot of hype with the movie thirteen years back but everything with the movie was a big disaster. "Barb Wire" has a stupid story, horrible acting and in overall, filmmaking at its worst. I can't really think of any thing that would make me recommend this movie to any of you. Well, maybe two... Ye be warned! "Don't call me babe!"