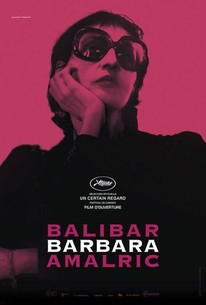 An actress, Brigitte, is preparing to play famous French songstress, Barbara in a new film. Brigitte works on her character, studying Barbara's voice, her songs, gestures and the way she carried herself. Eventually, the character of Barbara starts to take her over. As things progress, Yves, the director becomes infatuated with her -- but does his infatuation lie with Brigitte the actress, or Barbara?

In Barbara, the process of filmmaking is shown to be a nesting series of shells that allow one to be simultaneously freed and lost.

An oddly alluring film that does a double backflip on hokey showbiz-bio convention: not an informative introduction to the singer by any means, but a suitably eccentric evocation of her creative essence.

Apart from occasional highs linked to songs, such as a beautiful scene of Brigitte in silhouette at the piano singing "Je ne sais pas dire," there's not much development here.

Amalric is an astute student of cinema. He is keenly aware of the medium and knows how to benefit from its possibilities but not in a showy way. His aimlessness is also his best asset. The film is rhythmic, fluid and free. One of the year's best.

Barbara deviates from what is expected from a conventional biopic, and its proposal includes several stimulating points with which, unfortunately, Amalric never manages to do anything worthwhile. [Full Review in Spanish]

An explosion of formats and textures, layers of narrative, aesthetic, like vital onion layers, in which everything is confused and nothing is incomprehensible. [Full Review in Spanish]

[Mathieu] Amalric confirms he is a filmmaker in full control of his own vision, which intensifies from one title to the next. [Full review in Spanish]

Proves, once again, that the biopic is something more than those paradoxically interchangeable hagiographies that the mainstream loves to produce. [Full Review in Spanish]

A prodigious polyhedral dialog between archive, myth and representation that surpasses the musical biopic... [Full review in Spanish]

...a film so sincere, it sometimes seems unreal. [Full Review in Spanish]

Beyond a portrait, Barbara is also a polyhedral analysis and exalted of the process of construction of any character. [Full review in Spanish]

There are no featured reviews for Barbara at this time.