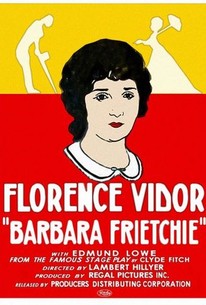 A family is torn apart by the Civil War in this romantic battle saga. Barbara Frietchie (Florence Vidor) falls in love with her brother's West Point classmate Captain Trumbull (Edmund Lowe). He joins the North and her brother (Emmett King) becomes a Colonel in the Confederate Army. The disheartened Barbara vows never to see Trumbull again when he pledges his allegiance to the North. When the victorious Union Army approaches, Trumbull saves his old friend Colonel Frietchie from being shot as a spy. Barbara forgives Trumbull after she is wounded in the melee.

If only the beginning and the end were cut off from it, Barbara Frietchie would ho a thoroughly commendable film.

There are no featured reviews for Barbara Frietchie at this time.