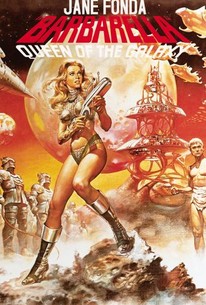 A voluptuous outer space agent travels to another galaxy in search of a missing inventor in this science fiction send-up. Barbarella (Jane Fonda), an interstellar representative of the united Earth government in the 41st century, is dispatched to locate scientist Durand Durand, whose positronic ray, if not recovered, could signal the end of humanity. Outfitted in an array of stunning Star Trek/Bond girl outfits and cruising around in a plush, psychedelic spaceship, Barbarella travels to the Tau Seti system and promptly crash-lands. She then spends the rest of the film discovering the joys of interstellar sex with a keeper of feral children (Ugo Tognazzi), a blind, beatific angel (John Phillip Law), and an inept revolutionary named Dildano (David Hemmings). Slowly but surely, she also finds her way to Durand Durand by moving from one exotic, Wizard of Oz-style locale to another. Along the way, she meets the kindly Professor Ping (a surprisingly verbal Marcel Marceau), a Eurotrash dominatrix named the Great Tyrant (Rolling Stones gal pal Anita Pallenberg), and the Concierge (Milo O'Shea), a strangely familiar lackey of the Great Tyrant who tries to destroy Barbarella with his great big organ of love. Jean-Claude Forest, who created the character Barbarella in 1962 for V-Magazine, served as visual advisor on the adaptation. The film's missing scientist character famously inspired the band name of '80s pop stars Duran Duran (who altered the spelling slightly). Almost two decades later, the film also inspired electronic act Matmos, which was named after the aqueous personification of evil unleashed by the Concierge at the movie's climax. ~ Brian J. Dillard, Rovi

The film is ugly on so many levels -- from art direction to human values -- that it's hard to know where to begin.

Despite a certain amount of production dash and polish and a few silly-funny lines of dialog, Barbarella isn't very much of a film.

Episode 36: Love in the Time of Monsters / Barbarella / Welcome to the Dollhouse / Johnny Guitar

The plot is essentially nonexistent, used to transport Barbarella from one exotic locale to another, where she'll be fondled or attacked in increasingly silly manners.

Barbarella is a gift-wrapped 'X' certificate bonbon for a space age nursery.

... Buck Rogers reworked as a sex kitten in space for the 1960s culture of free love and pop art.

Few films are as much 60s as this. From the soundtrack and songs or the entire production design to the message and characters. Of course it's incredibly dated from today's point of view and the plot is nothing special. But some parts are so obscure, funny and weird you can't help but be entertained. And at least they made an effort with their set pieces. It also helps that Fonda is incredibly beautiful and charming. Odd nonsense, but unique.

A film that divides even the best lovers of camp and filth, Barbarella is a complicated film to review but an intoxicating one to watch. Far less than a real tale of a strong female warrior in the depths of space, Fonda's performance is one of innocence and sexual unrest. In her physical prime at the time, not much of the film is about the exploits of this space assassin and much more of it circles her body and the sexual shenanigans she gets herself into. Barbarella isn't even a real character, but more a sex addict with a capacity for learning that spans the length of her own petite hand. She always seems surprised or discombobulated, and she's supposed to be the professional asskicker that the film bodes. Though Barbarella isn't the crusading feminist icon I was hoping for, she is an interesting character, in that she finds interesting worlds and people to engage with. Little of the story makes proper sense and it really doesn't matter, because it's about the exploits of Barbarella. There are at least four sex scenes within the film, and plenty more alluded to and partially shown. She has sex with furry mountain men, angels, machines, and through futuristic means. She always seems surprised by what she's doing, but always willing, never satisfied by either her conquering of worlds or foreplay. The worlds she moves between often consist of partially nude nymphs, with alien exteriors. Though most of this is fun frolicking, there is consistently an ick factor: the time period. The sixties had a lot of it and it is reflected in the cheaply made sets, the tone deaf score and music, including that Tom Jones rip-off theme song, and the dialogue, filled with the overbearing "groovy"s and "great man"s of the day. There wasn't any womanly pride, no trace of feminism, but certainly the overtones of sexual revolution and reinvention. It is certainly a great film to see for the progression in Fonda's career or if you like kinky, exploitative, cheap, sci-fi from the sixties.

Based on some comic book I've never heard of, this is swingin' 60s campy sci-fi schlock romp about a gorgeous (and ditzy) outer space agent named Barbarella who is sent to search for a missing inventor and stop any evil threatening to wreak havoc upon the galaxy. Barbarella is basically a bubbly female James Bond who wears a number of different skin tight space outfits, and somehow usually finds a way to lose varying degrees of said outfits throughout the course of her adventure.. In fact, the movie gets kicked off by having our title character float around in zero gravity and strip her clothes off as the opening credits "try" to cover up some of her more naughty bits. This is not really a good movie, and it is quite campy, silly, and dumb, but even then, it is quite entertaining, and reasonably fun. The set and costume designs are really cheeky, the music is typical 60s poon palace music, and, despite not doing that great of an acting job, Jane Fonda definitely has a wonderful, likable, and certainly memorable presence as the title character. I also loved the hardly subtle dirty humor and sexual undertones here, definitely making this a product of its time. If you're bored and want to kill some time (and maybe a couple of brain cells), and don't mind settling for dopey crap, then this would be a wise choice for viewing. It's not great, but it does at least put forth a little bit of effort, even if it ultimately comes up short.

Curvaceous Barbarella flies across the galaxy in her swinging bachelorette pad searching for Duran Duran and, in the process, meeting a blind angel, smoking the Essence of Man in a city of sin, and breaking the Orgasmatron. Kinky, kitschy psychedelic sci-fi fun with unforgettable sets and costumes.