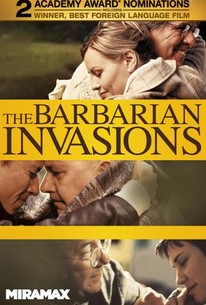 Director Denys Arcand revisits the situations and relationships that informed his international breakthrough The Decline of the American Empire with this dialogue-driven character study. Set 17 years after Decline, The Barbarian Invasions, like its predecessor, examines the varying politics -- economic, personal, and sexual -- at play among an aging group of friends, lovers, and ex-spouses. This time around, leads Remy (Rémy Girard) and Louise (Dorothee Berryman) are divorced, with their son Sebastien (Stéphane Rousseau) living in capitalist splendor in London. But the slightly estranged family is brought together by Remy's losing battle with terminal cancer, and the hedonistic, ex-radical father and straight-laced son have to overcome their differences. Along the way, Remy waxes nostalgic with many of the same pals who made up the dinner party of the first film. ~ Michael Hastings, Rovi

Jean-Marc Parent
as Ronald the Syndicalist

It is a beauty. It blitzes all the phoniness, pretentiousness and political correctness around today, savages icons of popular and national culture, gives the finger to religious untouchables like Mother Theresa, and brought the house down.

Arcand's own script is delightfully fluid, his direction poised.

Despite an uneven cast, Arcand finds a tonal balance between sentimental and cynical that keeps the conversations real and heart wrenching.

A full-bodied, funny and gloriously unpretentious ode to family, friendship and the meaning of life.

So many fascinating ideas are raised here that Arcand's decision to explore them within the context of a self-satisfied soap is disappointing.

Both the comedy and the weepy moments tend towards the trite, but the film is directed and performed with such brio and manipulative skill that one eventually succumbs to its somewhat dubious charms.

The film is deeply eclectic and confused, the characters largely unreal and caricatured. Arcand has the unfortunate inclination to be paradoxical rather than penetrating.

[A] subtle and scrupulously intelligent film.

"The Barbarian Invasions" is an intriguing meditation on the inevitable fall of ideologies under the pressure of nature's laws.

Humour, whether darkly observant or skilfully witty, twines through the film like a confidently creeping ivy, growing out of the characters quite naturally.

The film may be more of a sad commentary on the human condition than traditionally sad in the manner Arcand intended.

The film's emotional ending is deeply felt and powerful, examining the pain and the humor of life without pathos or melodrama. As such, the film resonates and lingers.

Much more moving and complex that the first picture, Danys Arcand bring these delight characters to the screen again, together with past, present and future sad ghosts.

A French Canadian guy is dying slowly so his rich son sets it up so he goes out after his old friends party together one last time (like that Greek philosopher guy ... but with woman). Lotsa talk about the good ol'days and sniffles later and everyone nods their head and says goodbye. Tries maybe too hard to be meaningful, like a Hallmark card with nothing personal written on it.

A truly outstanding film that leaves you with a great deal to digest. It does have its lulls, but the excellent acting and the double-edged sword that is Arcand's script more than make up for it. To the very end, you don't know who to take seriously and who to dislike, and the end result is a moving experience sprinkled with some of the darker comedy you'll ever see on film. It's a great creator of cynics, and while you may think you get what you want with the ending, you may not want what you got. It's brilliant.

The guy who played the son looked a LOT like Zach Braff. All the themes - whether concerning the culture clash between the liberal and conservative, or the moral question of using drugs - gracefully intertwine to make this dazzling, dazzling gem of a film. I REALLY wish I could've seen "The Decline of the American Empire" prior to this so that I could've gotten to know the characters a little better, but this stands on its own extremely well.