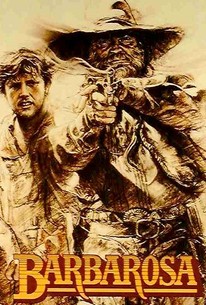 Barbarosa is a western starring the unlikely screen team of Willie Nelson and Gary Busey. Nelson is an outlaw, Busey his country-bumpkin buddy. They decide to ride together, since both are on the run from separate family feuds. Directed by Australian filmmaker Fred Schepisi, the screenplay for Barbarosa was written by William D. Wittliff who would later gain acclaim for his adaptation of Larry McMurtry's Lonesome Dove.

Schepisi doesn't have time to show off; Despite the opportunity for some beautiful widescreen vistas, he doesn't use them as a crutch or a cheap conduit for a scene transition without a proper segue. [Well, other than Busey's unbelievably toothy grin.]

Barbarosa comes along just when we thought Westerns were extinct: this gritty mongrel saga ought to satisfy all sagebrush devotees.

There are no featured audience reviews yet. Click the link below to see what others say about Barbarosa!