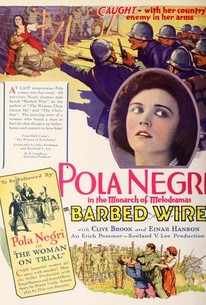 Barbed Wire was based on The Woman of Knockaloe, an antiwar novel by Sir Hall Caine. The original novel dealt with the deleterious WWI-era policy of shipping German-born British citizens back to their "homeland" at the outbreak of the war, no matter how long they'd lived in England. The hero, who'd been brought from Germany to the Isle of Man in his infancy, is forced to spend a lengthy internment at the Knockaloe Alien's Camp before his deportation. The story concerned his relationship with a Manx farm woman who is sympathetic to his plight. Screenwriter Jules Furthman rewrote Caine's story as a traditional POW drama, changing the locale to France. Polish actress Pola Negri stars as Maria, a French farm girl whose romance with German prisoner-of-war Oskar (British actor Clive Brook, who'd spent the war in his own country's service as an officer) forms the dramatic nucleus of the story. In the interests of authenticity, most of Oskar's fellow prisoners were played by genuine German war veterans who'd spent the duration in POW camps. Even so, the film was essentially a vehicle for Pola Negri, and as such falls just short of being a classic of its genre.

Ben Hendricks Jr.
as The Sergeant

Einar Hansen
as The Brother
View All

Miss Negri's performance throughout the picture Is unusually good, and the work of Clive Brook as the German prisoner is likewise impressive.

There are no featured reviews for Barbed Wire at this time.