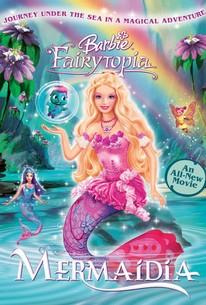 Prince Nalu has been kidnapped by a power-hungry fairy who's looking to cement her status as the most powerful figure in Mermadia, and it's up to Elina to rescue the prince and thwart the scheming sprite's plan before it's too late in an animated fantasy adventure follow up to the hit Barbie: Fairytopia. Laverna has a plan, and only Prince Nalu can help her realize her dreams of ruling over Mermadia with absolute authority. The only one in Mermadia who knows the whereabouts of a special berry with the power to make Laverna even more powerful than the Enchantress is the captive prince. Will Elina reach the devious Laverna in time to save the prince and ensure that the kindly Enchantress maintains her seat of power, or will the land of Mermadia fall prey to a power-hungry and selfish new leader?

I just think it's really impressive... they did not have to go to this much work creating all these worlds.

There are no featured audience reviews yet. Click the link below to see what others say about Barbie Fairytopia: Mermaidia!