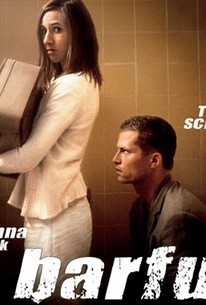 German writer-director Til Schweiger's romantic comedy Barefoot (Barfuss) concerns itself with the plight of Nick Keller (Schweiger) a young man branded as an outcast and a ne'er-do-well by his exorbitantly wealthy family. Unable to hold a permanent job, and harboring deep-seated contempt for anyone in a position of authority, Nick retains the admiration and respect of only his mother, who persistently believes that one day, he will somehow rise above his loser past and accomplish something of merit. Indeed, this appears to be the case when Nick accepts a job at a psychiatric clinic and saves a troubled young woman namedLeila (Johanna Wokalek) from suicide, but she soon turns up at his home late one night, barefoot and clad in a nightgown. This issue-ridden girl battles post-traumatic stress disorder from her mother's untimely death, and harbors a phobia about being touched. Nonetheless, a quirky and unpredictable romance soon blossoms between Nick and Leila, and they set out together on an unforgettable road trip. For the first occasion in his life, Nick soon becomes accountable to someone other than himself.

Til Schweiger
as Nick Keller

Despite being highly derivative and often predictable, 'Barefoot' contains some truly funny moments, and even an occasional moment of saving grace

A very manipulative, Hollywood style film that works despite its cliche-filled plot because of its performances and breathtaking cinematography.

There are no featured audience reviews yet. Click the link below to see what others say about Barefoot!