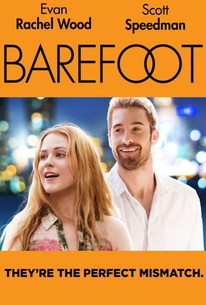 The "black sheep" son (Scott Speedman) of a wealthy family meets a free-spirited, but sheltered woman (Evan Rachel Wood). To convince his family that he's finally straightened out his life, he takes her home for his brother's wedding where an improbable romance blooms, as she impresses everyone with her genuine, simple charms. (c) Roadside Attractions

Jennifer A. Pates
as Flower Girl
View All

The gradual revelation that there's more to Daisy than meets the eye is no great surprise, but it does at least negate - too late! - some of the more troubling subtext.

It's all thoroughly, intentionally lightweight, and the film's final 10 minutes is a rush of highly unlikely smiley face resolutions. Still, Wood somehow makes it work as well as it can.

He's a rebellious trust-funder who specializes in strip clubs, one-night stands and gambling debts. She's a possibly schizophrenic mental patient raised in near-captivity by an abusive mother. How could these two kids not fall in love?

Scott Speedman and Evan Rachel Wood would have been better off doing a YouTube video together where they simply make goo-goo eyes at one another than co-starring in a featherweight trifle like "Barefoot".

Really, the emotionally ill have enough stigmas to contend with. They don't need the patronizing-yet-popular movie one of "They're just like us - only, you know, more innocent."

A sorry throwback to sentimental 1960s movies -- the ones in which an offbeat woman repairs the soul of an emotionally clueless man.

Evan Rachel Wood gives Daisy a sort of Goldie Hawn meets Liza Minnelli that is comical and endearing even as a story unfolds that isn't even remotely believable.

Suffers from a suffocating, inescapable earnestness that results in a nonsensical fairy tale that is neither magical nor likeable.

Barefoot follows an expected Pretty Woman-esque path, but it's quite charming along the way, and the oddball premise helps it feel fresh.

There was once a time when director Andrew Fleming made fantastic films.

A soggy mess, one that takes a thoroughly simplistic look at mental illness and the people who suffer from it, delivering instead a romance and a road trip that are entirely unrealistic.

I watched some, but I felt like I'd seen it all before and done better. I couldn't believe in the characters or situation at all.

Evan Rachel Wood and Scott Speedman star in the quirky romantic comedy Barefoot. The story follows an L.A. hustler who pairs up with a young woman who's escaped from a mental hospital and takes her to his brother's wedding, hoping to pass her off as his girlfriend. Wood gives an incredible performance that really captures the sweetness and naiveté of the character. And her chemistry with Speedman is quite good, as the two come off as a charming (and eccentric) couple. Additionally, the film has a nice message about loving unconditionally. A rather underrated indie comedy, Barefoot is wonderfully entertaining and fun.