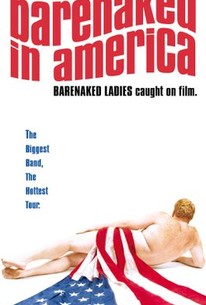 Were it not for Alanis Morissette, Barenaked Ladies would probably have been the biggest pop act to come out of Canada in the 1990s. Entirely male and generally fully clothed, the band scored a number of multi-platinum albums in their home country and enjoyed a healthy following in America before their fifth album, Stunt, and its hit single "One Week" made them stars. Actor Jason Priestley, a fan of the group, took a camera crew with him as he followed the band on their U.S. tour following the breakthrough of Stunt. Barenaked in America captures the band onstage, performing the quirky but good-natured pop-rock tunes that have made them famous, and offstage, as they kill time on the bus, talk about how the band came together, discuss keyboardist Kevin Hearn's bout with leukemia, and reveal themselves to be the well-mannered, self-effacing boys they seem to be. The filmmakers also went along for several TV appearances, including a spot on Conan O'Brien's talk show and a meeting with Jon Stewart.

Critic Reviews for Barenaked in America

Whatever secrets the musicians may be keeping, we've been tacitly urged to examine our reasons for wanting to know them.

Barenaked Ladies is a real band, and a popular one. One reason for its appeal is that it's the Slim Whitman of rock bands: When members sing a song, it sounds like you could do it, too, about as well as they can.

They play the funny songs, but just when things threaten to get too lightweight, singer Steven Page lets loose with a riveting, scorchingly soulful rendition of 'Break Your Heart' to let everyone know they're not just clowning around.

For the discerning rock fan and/or filmgoer, Barenaked in America is about as insightful as an MTV promotional video.

A reasonably entertaining way to kill an hour and a half.

A funny, spirited film driven by the band's sense of humor and energetic performances.

inquisitive and stylish, blending the distinguished personalities of the Barenaked Ladies with zest and humor of the film's clever interviews.

There are no featured reviews for Barenaked in America at this time.