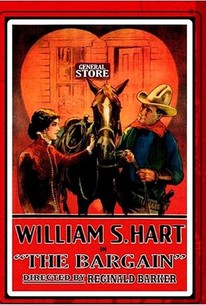 William S. Hart's third film and his first multi-reel western, The Bargain tells a familiar Hart tale of a good-bad man redeemed by the love of a woman -- in this case the sturdy-looking Clara Williams. When stage robber "Two-Gun" Jim Stokes (Hart) is wounded during a heist, he finds a willing nurse in the naive Nell (Williams). They fall in love and marry. Wedded bliss changes the former villain, and he attempts to return the stolen goods. Arriving back in town, Stokes is apprehended by the sheriff who then promptly loses the recovered valuables at the gaming table. Having discovered the hard way how alike they really are, lawman and prisoner strike the bargain of the title: If the sheriff will let him go, Stokes will recover the money. He does just that -- by robbing the gambling house -- and is arrested once again. But the sheriff, keeping his end of the bargain, releases the now truly repentant Stokes to the forgiving Nell.

Critic Reviews for The Bargain

It's an interesting wild West story of its own, making up in speed what it lacks in finesse.

There are no featured reviews for The Bargain at this time.