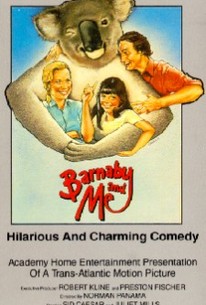 Norman Panama's penultimate directorial effort, Barnaby and Me was originally filmed for Australian television. The title character is a talented Koala Bear, who is to Australian fans what Benji is to Americans. Pausing in his escape from a vengeful mobster, American con artist Caesar falls in love with Juliet Mills, whose daughter Sally Boyden keeps Barnaby as her pet. The kooky koala teans up with Caesar for a series of picaresque adventures. It's hardly The Sting, but it's easy to take.

James Condon
as The Chairman

John Newcombe
as Himself

Critic Reviews for Barnaby and Me

There are no critic reviews yet for Barnaby and Me. Keep checking Rotten Tomatoes for updates!

There are no featured reviews for Barnaby and Me at this time.

Barnaby and Me Quotes