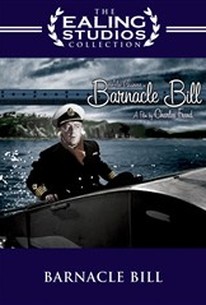 In this slapstick British comedy, a proud man from a family of seamen is so prone to seasickness that even the slightest aqueous movement makes him unbearably ill. The man's illustrious family history is witnessed from the Stone Age via flashback. To preserve his family's name and his own honor, he opens up a hotel for sailors with an amusement pier. It is a great success and this inspires the jealousy of the local residents who try to destroy his new empire. Fortunately, the fellow's sailor pals intervene and save the day. ~ Sandra Brennan, Rovi

Maurice Denham
as The Mayor

Richard Wattis
as Registrar of Shipping

Donald Churchill
as Roy
View All

There are no critic reviews yet for Barnacle Bill. Keep checking Rotten Tomatoes for updates!

There are no featured reviews for Barnacle Bill at this time.