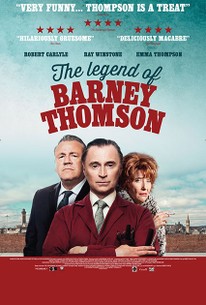 Critics Consensus: The Legend of Barney Thomson may not quite live up to its grandiose title, but it offers a fine calling card for debuting director Carlyle, and Emma Thompson's performance adds a spark.

Critics Consensus: The Legend of Barney Thomson may not quite live up to its grandiose title, but it offers a fine calling card for debuting director Carlyle, and Emma Thompson's performance adds a spark.

Critic Consensus: The Legend of Barney Thomson may not quite live up to its grandiose title, but it offers a fine calling card for debuting director Carlyle, and Emma Thompson's performance adds a spark.

Barney is a hapless barber, devoid of charm and 'patter' as his fellow barbering brethren mockingly remind him. Barney's mediocre, mundane life of plotting for a way up is about to be transformed, following a typically incompetent fit of pique, when he inadvertently stumbles into serial murder, and with it headlong into the trail of a grotesque series of killings gripping Glasgow. As he makes ham-fisted attempts to cover his tracks, he finds himself on the run from the bearish Detective Inspector Holdall and a testosterone-driven local Police task force at each others throats over the ongoing crimes. With his sanity threatening to unravel, Barney fatefully turns to his domineering, emasculating mother, the formidable Glaswegian 'good-time girl', Cemolina. There's no turning back now and the path that lies ahead for Barney may yet be littered with more murderous consequences than he could have ever anticipated.

You don't have to be a Scot to laugh yourself silly at The Legend of Barney Thomson, although canny viewers will no doubt catch more of the inside references.

Robert Carlyle is excellent as the lugubrious and downtrodden Barney, but as he makes his directorial debut here his rhythm on this deadpan comedy is erratic.

Not as clever as it wants to be, some comic bits stumble and the ending is ridiculous, although Carlyle and Thompson give it their best shot.

Ray Winstone's irascible English copper all but blows steam out of his ears, and Ashley Jensen chews whatever scenery hasn't already been trampled.

Ably supported by a strong cast including Ray Winstone and a nearly unrecognisable Emma Thompson, there is certainly some directorial skill in [Robert] Carlyle's bones.

Carlyle achieves a consistent wry, shaggy dog tone that works on low-key terms. Fans of its stars will be pleased; fans of murder comedies have seen both better and worse.

Making stylish use of its Glasgow locations, Carlyle's black farce about a serial killer moseys along in fine enough fashion, but it suffers from a fatal lack of laughs.

Whilst the ending is rather silly and possibly too neat, it is a rather enjoyable film so bring your blackest humour to watch this.

The Legend of Barney Thomson has a few redeeming features scattered throughout, but for Carlyle it's much too bland and undefined.

The film's final showdown may be stylised and as ludicrous as they come, but by then we've become caught up in Barney Thompson's endearing, exaggerated lunacy.

Robert Carlyle can act and direct, it's the script that's letting him down here.

Unless your a follower of the TV show Once Upon a Time (which I'm not) then you'll probably have noticed the absence of actor Robert Carlyle from our film screens. The occasional low-key drama like California Solo in 2012 and Samantha Morton's hard-hitting The Unloved in 2009 have surfaced here and there but they didn't receive a wide release at all. In fact, I have yet to even see the former and Carlyle had a very small role in the latter (albeit a powerful one). You'd probably have to go as far back as 2007's 28 Weeks Later to mention a film that a mainstream audience might be more familiar with. Now, though, he's back. And back he comes to his hometown of Glasgow to make his directorial debut with a very Scottish-centric black comedy. Barney Thomson (Carlyle) is a socially awkward barber who fails to strike up any rapport with his customers. As a result, his boss Wullie (Stephen McCole) decides to let him go. Without his job, though, the only thing Barney has got in his life is his domineering mother Cemolina (Emma Thompson) and in aid to keep a hold of his job, Barney finds himself in the unlikely position of becoming a serial killer. Anyone who's followed my blog for a period of time may remember the glowing praise I have regularly afforded to Carlyle. I think he's a fantastic actor and one of Scotland's best. It's been saddening to see so little of him over recent years but a pleasure to see him return with an adaptation of the first book in writer Douglas Lindsay's Barbershop Seven series - The Long Midnight of Barney Thomson. It's a quintessentially Scottish story that requires someone with a knowledge of the city (and it's inhabitants) to adapt it for the screen and, on that note, Carlyle is the perfect man for the job. His ability to capture the Glasgow idiom is, as expected, on full display here and there are regular moments of hilarity. He also utilises the austere city locations to brilliant effect. The time in which it's set is not entirely clear (it could be set in the 70's or 80's) but Carlyle has a good eye for a bygone era and captures a particular style with crisp and observant detail. He's also managed to assemble an impressive cast who contribute characters that are as colourful as their language; Emma Thomson is a foul mouthed treat under her cheap leopard print coat, heavy make-up and an even heavier Glaswegian accent. Winstone does his usual cockney fing but it works well for the material and there's a quality supporting cast of Scottish actors from James Cosmo, Martin Compston, Stephen McCole and Ashley Jensen - who gives Winstone a run for his money in the three-testicle profanity stakes. As the titular character, Carlyle flits between drama and comedy with ease and displays and myriad of emotions along the way: despair, desperation and rage consume his character daily and his nervous disposition and social awkwardness doesn't help matters. As an actor, Carlyle's chops have never really been in question but the overhanging question surrounding this film is whether his direction is it up to scratch? Well, the answer to the that is a simple... yes. Yes it is. Carlyle shows some impressive and inventive directorial flourishes and you can see where directors he has worked with have had an influence on his approach. It's definitely a talent that I hope he chooses to explore more of - although he has already stated that he's in no rush to do so. The film is not without problems, though. They don't lie with the performances or the direction but, predominantly, with the narrative. At times, the pacing feels off and the least said about the final third of the film, the better. Suffice to say that it drastically falls apart with a misplaced, explosive denouement that looks like it's wandered in from another film. It's the type of material that the Coen brother's handle comfortably but in his first directorial outing Carlyle has enough panache and talent to make it work and make it enjoyably macabre and offbeat entertainment. It's always been apparent that Carlyle has a flair for drama but he proves to have a good eye and ear for comedy too. I wonder how well this would translate to others who are perhaps unfamiliar with Scottish humour but, over time, this has the potential to become quite the little cult movie. Mark Walker

You'll need to be able to decipher a Glasgow accent to catch a ride in this Robert Carlisle directorial offing wherein an everyman barber suddenly finds his life littered with body parts and the coppers closing in on him as the suspected killer. I laughed throughout this dark comedy that's totally stolen by zaftig Emma Thompson as a bingo lady gone way bad.