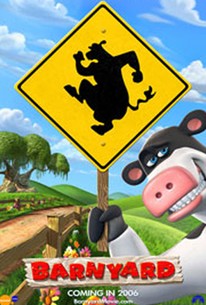 Critics Consensus: Unimaginative and unfunny, this tale of barnyard mischief borders on 'udder' creepiness and adds little to this summer's repertoire of animated films.

Critics Consensus: Unimaginative and unfunny, this tale of barnyard mischief borders on 'udder' creepiness and adds little to this summer's repertoire of animated films.

Critic Consensus: Unimaginative and unfunny, this tale of barnyard mischief borders on 'udder' creepiness and adds little to this summer's repertoire of animated films.

A cow learns to walk like a man, both literally and figuratively, in this computer-animated comedy written and directed by Steve Oedekerk, the creator of Jimmy Neutron: Boy Genius. Ben (voice of Sam Elliott) is a cow who for years has been the leader and sober voice of reason among the animals at a farm where the critters are a bit unusual -- they can walk on two legs, talk, swim, and act like humans, though they have the good sense to avoid doing these things while humans are around. Ben has long dreamed that his son Otis (voice of Kevin James) would someday take over his duties on the farm, but Otis is a carefree and irresponsible type who would rather party with his friends and hang out with his girlfriend, Daisy (voice of Courteney Cox). Ben and his friend Miles (voice of Danny Glover), a wise and patient mule, wonder if Otis will ever make anything of himself, while Dasiy's best friend, Bessy (voice of Wanda Sykes), is convinced she can do better. However, one night Otis decides to do something about an obnoxious kid who enjoys tipping his fellow cows, and for the first time in his life he gets a taste of leadership -- and he likes it. Barnyard also features the voice talents of Andie MacDowell, Maria Bamford, and Maurice LaMarche. ~ Mark Deming, Rovi

Nathaniel Stroman
as Root the Rooster

The laughs subside near the end as the requisite moral kicks in, but this is still that rare kids' movie I'd recommend to parents and nonparents alike.

Deserves to be hanging in the nearest meat locker.

This could be the film that snaps everyone's patience with Hollywood animations which have a Dell computer chip where their heart should be.

Strictly for kids, and, as the three or four people who saw Oedekerk's previous directing effort, Kung Pow: Enter the Fist, can attest, the writer/director tends to stretch even throwaway jokes minutes past the punch line.

The overall feeling I had leaving Barnyard was one of feeling genuinely creeped out.

A re-hash of tired cliches and CGI effects.

Criminal acts and scenes of brutal violence spoil the effect of "Barnyard" as an animated movie for tots.

That the lead character is a 'male cow' complete with udders shows how confused the picture is.

The animation is perfectly colorful and the voice actors earn their paychecks, but it's blatantly obvious that this thing started production without a screenplay -- and hit the screens without a plot.

This was really depressing actually. It only focused on death and loss and no fun moments were in this movie. It had fun characters but when it came to story this made me either scared or depressed.

the film had a great plot great drama, and the actors were all perfect in this film

Full of depth, emotion and hilarious jokes, barnyard is like a Disney film except for funnier and more moving. And better. Nice little side twists, and good animation as well.

This was a fun idea and a very good movie. me and my daughter laughed the whole way through. Now of course the biggest problem with the movie is the fact that Otis a male COW. . yeah ..