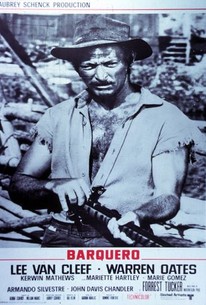 Lee Van Cleef plays a fiercely independent river ferryman in the Old West. Bandit Warren Oates, fresh from decimating a local town, rides up with his gang and demands that Van Cleef transport the crooks and their booty across the river. He refuses, and is taken prisoner. Biding his time, Van Cleef is able to turn the tables on the vicious gang. Heavily influenced by the ultraviolent "spaghetti western" school, Barquero attempts to add a contemporary note to the proceedings by having Warren Oates take an hallucinatory "trip" after smoking an unidentified weed.

Rita Conde
as Layeta
View All

There are no critic reviews yet for Barquero. Keep checking Rotten Tomatoes for updates!

The massacre at the beginning & all the shootouts were just awesome.I would have never thought a Western based on a battle between good & evil over a river barge would be this good.If I had a Top 10 list of Westerns then Barquero would be on it