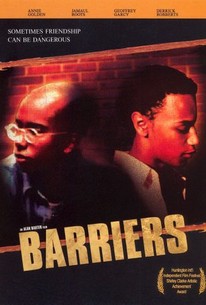 This poignant drama follows an unlikely friendship between two boys from opposite sides of the tracks whose relationship challenges the boundaries imposed upon them by their environments. When streetwise Snake (Geoff Garcy) defends privileged Tori (Jamaul Roots) from a gang of bullies, the pair begins a friendship that changes their lives. Directed by Alan Baxter, this thought-provoking film also stars Quentin Crisp and Annie Golden.

There are no critic reviews yet for Barriers. Keep checking Rotten Tomatoes for updates!

There are no featured reviews for Barriers at this time.