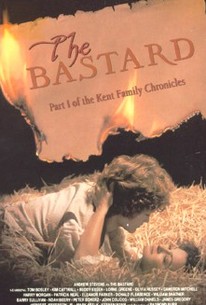 Produced for the syndicated "Operation Prime Time" series, The Bastard is the first of John Jakes' "Kent Family Chronicles" (followed by The Rebels and The Seekers). Presented in two parts, the story begins in 1771, with 17-year-old French commoner Philippe Charboneau (Andrew Stevens) discovering that he is the illegitimate son of a British Duke. He goes on a long journey, girdling several countries, to claim his birthright, with his mother (Patricia Neal) along for the ride. Settling in America in 1772, our hero--now known as Phillip Kent--becomes involved with the American Revolution. The all-star cast includes Buddy Ebsen, Barry Sullivan, Harry Morgan, Lorne Greene, Donald Pleasence, Tom Bosley (as Ben Franklin), William Shatner (as Paul Revere) and William Daniels (as Samuel Adams). Distributed nationally beginning May 22, 1978, The Bastard was re-titled Kent Family Chronicles in the more conservative TV markets.

Critic Reviews for The Bastard

There are no critic reviews yet for The Bastard. Keep checking Rotten Tomatoes for updates!

There are no featured reviews for The Bastard at this time.