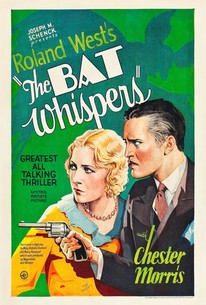 Magnificently restored by UCLA to its original "Grandeur" wide-screen format The Bat Whispers may not be a cinematic masterpiece but is certainly worth a second look. Opening with a series of flamboyant tracking shots, director Roland West soon enough settles down to the usual "Old House" shenanigans of sliding panels, mysterious bumps in the night, crawling hands, thunder and lightning (sounding more like an earthquake, incidentally, than a storm), etc. An official remake of the 1926 The Bat (which was itself based on an Avery Hopwood play), The Bat Whispers owed just as much to The Cat and the Canary (1927), the true grand-daddy of all haunted house mysteries. After taunting the New York City police a final time, the notorious criminal "The Bat" announces his retirement to the country. Meanwhile, in said country wealthy spinster Cornelia Van Gorder (Grayce Hampton is leasing the Courtleigh Fleming estate. The news of "The Bat" and the simultaneous disappearance of cashier Brooks Bailey (William Bakewell) shortly after a robbery at the Fleming bank set in motion a series of troubling events -- troubling especially for Miss Van Gorder's eternally frightened maid Lizzie (Maude Eburne). The missing Brooks Bailey shows up soon enough courtesy of Van Gorder's pretty niece Dale (Una Merkel), who persuades the young man to impersonate a gardener -- a disguise that fools no one. There is a mysterious doctor who speaks with an accent (Gustav von Seyffertitz); an equally alarming caretaker (Spencer Charters),; a piece of missing blueprint that leads to a secret room; and, of course, "The Bat," who appears to be prowling the estate as well. Enter into all this Detective Anderson (Chester Morris), who in his unique gritty way gets to the bottom of things. The "Grandeur" wide-screen format was lost on most movie-goers when the film premiered in late November of 1930. Exhibitors who had just spent fortunes rigging their theaters for sound were of course loath to spend even more on yet another "newfangled" invention. Of course, some of cinematographer Robert H. Planck's more breathtaking shots of "The Bat" climbing towering skyscrapers were lost in the standard 35mm prints. But cartoonist Bob Kane reportedly had this film in mind when he nine years later created his eternally popular comic-strip hero Batman. A sadly neglected craftsman, Roland West directed only 11 films before he retired at the age of 44. West (who also directed the 1926 The Bat co-starring his then-wife Jewel Carmen as the imperiled niece) left films to run a Santa Monica café with girlfriend Thelma Todd. He was questioned by the authorities but was apparently never a suspect in Todd's mysterious death in December of 1935.

Spencer Charters
as The Caretaker

Wilson Benge
as The Butler

Ben Bard
as The Unknown

Critic Reviews for The Bat Whispers

Size is the only new thing about The Bat Whispers.

A good picture in the class division, for shivers and smiles.

Culturally it may be most noteworthy for its title arch-criminal, who influenced the creation of Batman.

It is a well-directed film, but it seems rather a waste of time for Mr. West, for there is nothing new even in this bigger and better Bat.

[The plot is] a non-stop succession of spooky clichés strung together with scant regard for logic or motivation... Fascinating, however, is West's unusual visual sense: all enormous shadows, overhead shots, and (for the time) a surprisingly mobile camera.

[It] is by far the best movie adaptation of the stock spoof horror play set in a creepy mansion where masked menace lurks. It's also a superior mystery chiller in its own right.

The sets are top-notch, presenting the proper eerie atmosphere.

There's no doubting the sincerity or intention of The Bat Whispers, only how well it's aged.

The Bat Whispers is a talkie remake of Roland West's silent 1926 version.

Audience Reviews for The Bat Whispers

Well folks we made it through the month of October and I still can't sleep at night. That's a good thing. We are going to be marching on throughout the rest of the year in mostly chronological order, and I am currently working on a new format for my reviews, just working out some of the kinks. The Bat Whispers is one of the more thriller heavy horrors flicks.The movie focuses on the crime side of its narrative a little heavier than its horror side, however it does have its spooky moments. Make sure to get a good version to watch, some copies are know to have quiet audio, I had to turn my television all the way up past eleven just to hear it. The movie has some amazing shots and even better sets that make it look just like a noir comic book. For sets the producers use everything from trick photography to scale models. The movie is very dark and has this almost freakish tone that really sets a mood. The narrative is about a caped theif/killer called 'The Bat' who terrorizes the occupants of an old mansion. The art in the movie is superb, the audio sucks but it was the 30's. This is a depression era movie so it is passable. The acting is pretty bad, but again the depression was afoot so people were... depressed. Passable. This movie serves as a precursor to great noir films like The Killing and Vertigo. The latter was directed by Hitchcock. I cannot wait to get into some of his stuff. The scariest part of this movie would have to be its dark tone and lack of soundtrack, both make for one creepy, dark movie. The premise is mostly mystery but the tone makes it horror. The use of light, or lack thereof, is amazing, it really adds something to it. I am going to give The Bat Whispers a 5 out of 10. The movie is great but the thrills are just two few and far between. The action is great and the film is well done but that doesn't make it a great Horror movie. Who am I? Who do you think I am? W.T. Jones. Super-sleuth of Oakdale County S!D

Excellent considering when it was made.