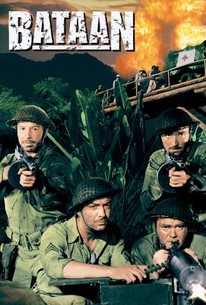 Bataan brilliantly transforms one of America's most ignominious wartime defeats into a paean to courage and perseverance. The time is 1942: a ragtag group of American and Filipino troops stand their ground in Bataan, hoping in vain to stave off the invading Japanese hordes. Robert Taylor gives an outstanding performance as the acting officer, who overlooks the character flaws of his men--especially incognito criminal Lloyd Nolan--and in so doing brings out the best of them during the worst of the battle. Though they know they're doomed when pilot George Murphy crashes in an attempt to fly off and fetch backup troops, the survivors bravely fight on until only Taylor is left. The film's last image is of Taylor grimly firing off round after round, yelling "Come on, you dirty...(we don't hear what he says, but we know what it is). MGM's Bataan ranks with Paramount's Wake Island as one of the best of the earlier war films; both deal with a battle lost, but both emerge as triumphant morale boosters. Bataan is compromised only by the obvious studio exteriors and the occasionally corny dialogue.

Since it was basically a tale of defeat, the nervous producers emphasized heroism, but later, under criticism of fabricating the facts with mechanically packed incidents, MGM was forced to acknowledge "some melodramatic flaws and technical mistakes."

MGM and the War Department teamed for this flag waving combat drama that influenced a number of future war movies.

There are no featured audience reviews yet. Click the link below to see what others say about Bataan!