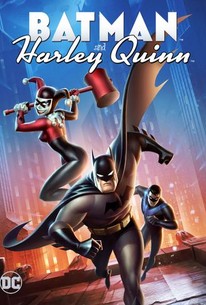 From an original story by animation icon Bruce Timm, comes an all-new DC Universe animated movie. Poison Ivy and Jason Woodrue (a.k.a. The Floronic Man) embark on an ecological quest to save the planet--and, unfortunately, eliminate most of humankind along the way. To save humanity, Batman and Nightwing are forced to enlist Harley Quinn to catch Poison Ivy, Harley's BFF and frequent partner-in-crime. But Batman's patience is put to the test by the unpredictable and untrustworthy Harley during the twists and turns the reluctant companions face during their bumpy road trip. The result is a thrill ride of action, adventure and comedy no Batman fan has seen before.

We get half-assed nods to sexuality and brutal violence; things that won't be found in any kids movie, but here is so poorly utilized that it most certainly isn't for adults.

This is an absolutely appalling movie.

Batman And Harley Quinn's lack of action and poor voice acting for the character of Harley Quinn makes for a disappointing film.

[Bruce Timm] and Sam Liu reduces [these characters] to rape, sex jokes, fart gags, and wish fulfillment for a certain niche of fan boys that get off on this kind of garbage.

Being perfectly honest, the movie is a rare misstep for Warner Brothers' animated DC output, and it feels horribly misjudged at several points.

The overall tone feels off with this weird mix of goofy, silly sequences and very mature adult themes.

Batman and Harley Quinn eeks out a recommendation for the humor.

You can see the tone they're going for and when it hits, it's a riot. But it misses more than it should, and with risqué material, it becomes too crude for comfort.

While Batman and Harley Quinn may not be the Dark Knight's greatest animated adventure, it's likely to make the majority of its viewers laugh out loud throughout. Prudes need not apply.

Eric Joseph
We Got This Covered

Make no mistake, this is a gorgeously rendered tribute to Batman: The Animated Series and the voice cast was top notch. But Batman and Harley Quinn just doesn't stand up to the best episodes of that show.

WHO IS THIS FOR? Batman and Harley Quinn isn't just tonally inconsistent from act to act, it's tonally inconsistent from second to second. Wildly inappropriate for children, too crass and silly for adults. Obscure lore and reference only DC-familiars will pick up on, but also completely out of character moments and scenes that will never fly with that same crowd. Both is and isn't set in the cult-classic Batman: The Animated Series Universe? Goes to the effort of getting DC voice alum Paget Brewster and the most famous Batman voice of all time, Kevin Conroy, but is stuck with Annoying-In-The-Wrong-Way Melissa Rauch to play Harley, who has never voiced the character before, and hopefully never will again. But sadly, it's better than most animated superhero movies we're seeing these days.

Very uneven from start to finish, It had a dark tone at times then it flips round and all of a sudden there's fart jokes, Unfunny humour and campiness but just when you think it's aimed at kids there's Allot of casual sexism with Harley Quinn then there's an off camera sex scene and a few bad words thrown in too, So let your kids watch as all the humour is for them but it does have an adult tone at times too, The animation was abit lazy and the action scenes were not great and the ending was silly, Camp and annoying, It felt like it was written by a kid and his drunk, Horny dad, I expected so much more from this film but it's a huge letdown.