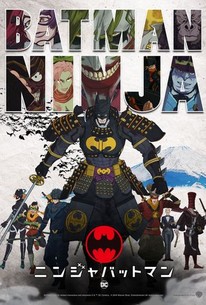 In this groundbreaking anime adaptation of the legendary Batman franchise, Gotham City is swapped out for feudal Japan, where Batman fights his infamous foes as an armored ninja. With Catwoman, Two-Face and the Joker all showing up to battle the Bat, will Bruce Wayne be able to save the day?

Wataru Takagi
as The Joker

This is a beautiful film in every sense of the word.

It is one of those feature films that must be faced with a certain predisposition and with the mind as open as possible. [Full Review in Spanish]

This is hands-down the most avant-garde animated film to come out of DC.

Batman Ninja is one of the most raucous movies of the year and the most entertained I have been in a while.

Overall, this is a film you should see for its outstanding visuals. Okazaki's character designs are simply astonishing, full of great moments of fun and action that will keep you hooked throughout the entirety of the film.

This elaborately executed nonsense is the kind of project where you just know that the title came first.

This take wasn't for me, but there's a lot to admire about this effort if for no other reason than shaking up the Batman animated movie formula and trying something different.

Superb anime and an unprecedented time-travel adventure bring a new dimension to this iconic hero.

It's one of the most eye-poppingly original takes on the Dark Knight, and certainly his most refreshing depiction since Christopher Nolan's trilogy.

In less loving hands it would be an unholy mess, but the passion behind the sheer audacity of what Batman Ninja lays down transforms it into an utterly joyful experience.

There's familiarity here, but there's a fresh feel the Japanese have brought to the film that, frankly, I'm quite happy for DC to keep.