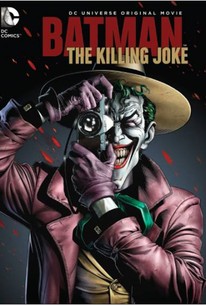 Critics Consensus: This stilted retelling of the Joker's origin adds little to its iconic source material, further diminished by some questionable story additions that will have fans demanding justice for Barbara Gordon.

Critic Consensus: This stilted retelling of the Joker's origin adds little to its iconic source material, further diminished by some questionable story additions that will have fans demanding justice for Barbara Gordon.

Fathom Events, Warner Bros. and DC Comics invite you to a premiere event when Batman: The Killing Joke comes to select cinemas nationwide for a special one-night event including an introduction from Mark Hamill plus two never-before-seen featurettes. Based on the acclaimed DC Comics graphic novel, take a journey into the dark psyche of the Clown Prince of Crime. Now escaped from Arkham Asylum, The Joker sets out to prove that one bad day can make anyone just as insane as he is. Featuring the return of Kevin Conroy as Batman, Mark Hamill as The Joker and Tara Strong as Batgirl, witness the birth of a super villain, the fortitude of a hero and the punchline that will leave you speechless!

Mark Hamill
as The Joker

On the whole, The Killing Joke feels like it was cobbled together out of different pieces of varying quality and, as such, it doesn't work as well as it might.

Batman: The Killing Joke is borderline unsettling - and not in a good way.

It really felt like 2 episodes of the animated series crammed together with nothing particularly cinematic to set the animation apart.

Writers didn't know what to do with Barbara back in 1988, and they don't know now.

Talking about this film, this story, is rough. It's rough because it commands a lot of questions on multiple levels of the creative process.

Just take my advice and begin where the comic does, or the joke's on you.

A faithful retelling of the classic graphic novel, albeit with some odd decisions regarding Batman and Batgirl's relationship.

Why would you watch the K-Mart version, when you can just read it as it was meant to be?

For anyone who's not a die-hard fan when it comes to these DC animated films, no one could blame them for taking a pass.

A reason to see this movie is that it shows exactly how to not write a heroine. It shows how to fail at empowering her.

It just turns the story into The Sorrows of Young Barbara, first sexualized by Franz, then rebuffed by Batman, and finally brutalized by the Joker.

The film only has life when the Joker is onscreen and that's for only half the film.

One of the most formative stories of the entire Batman canon, Batman: The Killing Joke is adapted for the screen as a full-length animated film. Based on an Alan Moore comic (though uncredited), Batgirl gives up the life of a vigilante after things get too personal but is pulled back in when the Joker escapes from the asylum and attempts to settle old scores and break Batman. Kevin Conroy and Mark Hamill reprise their roles as Batman and Joker and give solid performances. The animation is also pretty good, though not that much better than DC's usual straight-to-video features. And even though it has an R rating, it doesn't seem to do anything that daring or edgy with it. Batman: The Killing Joke is a disappointing film that fails to live up to the reputation of the comic.

Shares the few weaknesses of the short comic it is based on, but adds a bunch of its own new weaknesses to try and get it up to a theatrical runtime and justify its cinema release. I think part of the reason the reception for The Killing Joke has been so overwhelmingly negative is that the expectations were so high going in. But that wasn't without cause. It sees the long awaited return of both Kevin Conroy and Mark Hamill to their famed DC roles, and the comic it's based on is widely regarded as one of the better stories ever published by the company. And of these lofty expectations, The Killing Joke falls short. Hamill is great, and Kevin Conroy usually is as well. There are a couple of occasions that the latter slipped though. I don't know if he's rusty or just didn't care, but his voice performance is not 100%. The story essentially meets that of its source material, but rather than expand the existing story, they chose to awkwardly force an entirely different one in beforehand, to the point that this is essentially two episodes of two different shows, rather than a single cohesive movie. The Killing Joke is a little gross and is not the return to form for DC Animation that we all had hoped it would be, but the final sequence is fantastic and I don't know that the movie overall deserves quite as much vitriol as it has had.

Being a fan of the superhero genre ever since I was a little kid, anything released in this particular genre gets me excited right off the bat. Whether it is a live action film or an animated one, whether it is the Marvel Cinematic Universe or the DC Extended Universe, there is something about this genre that has always screamed fun. With the adaptation of Batman: The Killing Joke in limited theatres and Blu-Ray + DVD, I found myself very intrigued by the notion of bringing this story to life. While I am an avid fan of comic book films, I have read very little of their source material; Therefore, I did not have any prior knowledge of this story. Coming from a true comic book movie fan (excluding its source), here are my genuine thoughts on Batman: The Killing Joke. Right off the bat, this film begins with an older style of animation, making the film feel pretty dated. This threw me off at first, but having Mark Hamill and Kevin Conroy back to voice the main characters made that all the more fitting. Following Batman and Batgirl for the first act of the film, it plays out as an episode of one of the old Batman shows, where a villain is introduced, hunted, and captured. Once that story wraps up, the main story with the rise of The Joker occurs. With a few over-the-top lines of dialogue, maniacal laughs, and a very serious tone, Batman: The Killing Joke delivers on the promise; However, while delivering on its promise, it constantly derails itself from the core story. While the first act of this film is well done, it should go without saying that it is completely unnecessary. Without going into spoilers, it is very clear that the first act of this film is presented as it is, due to the events to come in the third act. This is why the film feels sloppy. Without the set-up of random plot points, there would be no payoffs and it would have been about 30-40 minutes shorter. For a film called Batman: The Killing Joke, is sure focusses on many more characters than Batman and The Joker. Using Batgirl as the main motivation for why Batman does anything throughout the course of this film is fine, but having her as a dominating character in the story felt very, very forced in my opinion. Overall, Batman: The Killing Joke focusses far too much on the side characters, making the main story feel abandoned by the time the film reaches its climax. The final moments are very jarring in my opinion and some of the action by the characters do not feel justified when the credits begin to role. I enjoyed watching most of this film, but looking back, a lot of it felt like filler for the short 30-minute story in the second and third acts. These gripes aside, it is clear that the filmmakers were trying very hard to come up with something a little different from the source material and I can definitely applaud the final product. With some great voice acting from Mark Hamill and Kevin Conroy, a few intense scenes, and pretty affective plot twist, this is a film that ultimately feels like two episodes of a Batman television show, with some extra scenes added in to extend the running time. While that may seem negative, the way it is done is effective. Batman: The Killing Joke is enjoyable, but nothing all that spectacular.

When it is adapting the graphic novel of the same name, Batman: The Killing Joke is phenomenal. Although its art style is less haunting, the script itself is very faithful to the script of the comic. This not only keeps all of the interesting ideas intact, but surprisingly, the structure of the story also makes for a relatively well paced and entertaining animated film. Unfortunately, The Killing Joke is not long enough to fill out the runtime of a feature length film. As a result, an extended, thirty minute prologue was added to help flesh out a character whose treatment in the original source material was often criticized. While the intent is commendable, this extended prologue is abysmal. It feels far too disconnected from the main narrative, but it is also extremely rushed and horribly written on its own terms. It not only suffers from not adding anything significant to the story; the things that are added clash thematically and tonally with everything that the rest of the film stands for. If you skip the prologue, Batman: The Killing Joke is absolutely worth your time, whether you love the original graphic novel or have never heard of it. However, with the prologue included, it's pretty poor. A shame, considering how good the source material (and half of this movie) is.