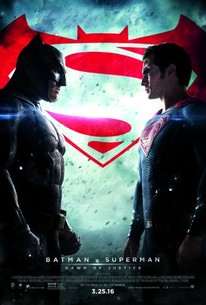 Critics Consensus: Batman v Superman: Dawn of Justice smothers a potentially powerful story -- and some of America's most iconic superheroes -- in a grim whirlwind of effects-driven action.

Critics Consensus: Batman v Superman: Dawn of Justice smothers a potentially powerful story -- and some of America's most iconic superheroes -- in a grim whirlwind of effects-driven action.

Critic Consensus: Batman v Superman: Dawn of Justice smothers a potentially powerful story -- and some of America's most iconic superheroes -- in a grim whirlwind of effects-driven action.

Jay Towers
as Reporter at Monument

Vikram Gandhi
as Himself

Andrew Sullivan
as Himself

Neil deGrasse Tyson
as Himself

Soledad O'Brien
as Herself

Dana Bash
as Herself

T.J. Martinelli
as US Park Officer

Let's not make any bones about it - on any scale, Dawn of Justice is painful to watch.

It is without question an important film today, and a quintessential product of the America we inhabit.

There is much to claw through here, so much so that the audience might easily find themselves exhausted from the overall aggression of the film. However, a lot of the story does work. The action is good, and the emotion feels real most of the time.

As this uneven film grinds to an end, it sets itself up for more shenanigans in more episodes with more super heroes.

While not the worst superhero comic book adventure ever to grace the multiplex, it's likely the most frustratingly disappointing.

Batman v. Superman: Dawn of Justice pits the two titans against each other with beautiful visuals, too many characters, and a borderline nonsensical plot.

Sometimes it sins with its expository dialogues, some themes are halfway to develop, it can be a little slow... but none of these failures transform it into the misfortune that the critics have been commissioned to sell [Full review in Spanish]

The leads embody their characters despite creative shortcomings, and could hold up a strong Justice League if the franchise is given some new directorial talent...

Maybe the film industry is tapping into our culture's difficulty with intelligent and mature conflict resolution...

Batman v Superman is almost unrelentingly dark, making the two-and-a-half hour movie tougher to get through than the lighter-toned Marvel movies. But it earns its superhero stripes thanks to great performances and some truly knockout action scenes.

At 2 hours and 33 minutes in length, the plot has some clear pacing issues. Too many ideas, whilst not enough happening.

The biggest problem with this bloated, exhausting movie is that it sinks trying so desperately to bite off (so much) more than it can chew, with a convoluted plot that is all over the place and too many characters whose motivations are mostly contrived and infuriatingly inconsistent.

Exceptional. Without question, the best Batman or Superman movie of the last 25 years excluding only Heath Ledger's "The Dark Knight" of 2008. Superb cinematography, very good acting, excellent direction, hair, costumes, and sound. The only draw-back was script writing and pacing, which were at times tedious, indolent and indulgent. Still, if you value character development more than action (as I do), this is an extraordinarily good comic book film.

Wasn't as bad as I'd expected. Unlike I'd feared, its long runtime did not work as a spoilsport and I was hardly distracted/irritated throughout the film. While it's not an incredible flick, it's quite watchable.